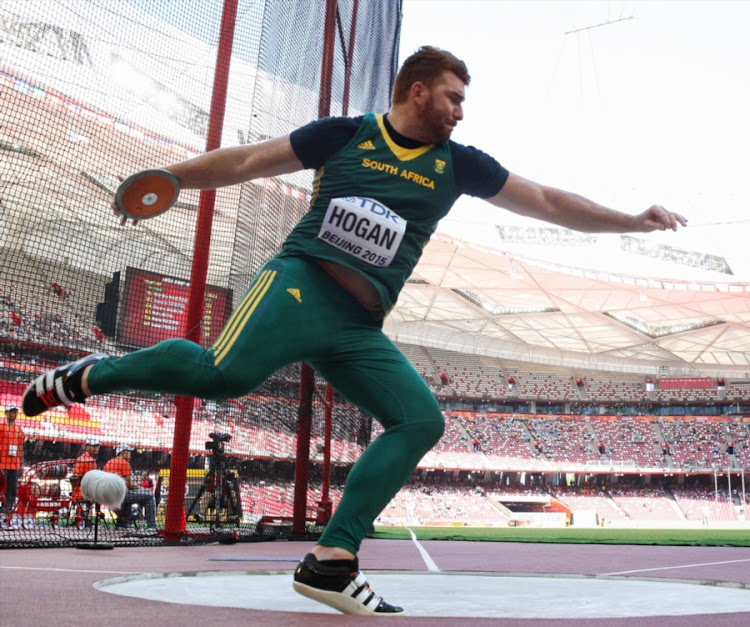 Victor Hogan of South Africa in the qualification round of the mens discus during day 6 of the 2015 IAAF World Championships at National Stadium on August 27, 2015 in Beijing, China.
Image: Roger Sedres/Gallo Images

Controversial in-out discus-thrower Victor Hogan could find himself competing at the world championships in London next month after all.

But it looks like its game over for the 14 athletes who were omitted by Athletics SA (ASA) despite achieving qualifying standards set by the world governing body‚ the IAAF.

That’s according to an unofficial website which tracks the selections‚ omissions and rankings of athletes globally.

ASA had said the 14 athletes could still get to London through quota invitations‚ but the site suggests otherwise‚ listing all non-selected athletes as out of contention for quota spots.

Caster Semenya will join Wayde van Niekerk and Akani Simbine by going for doubles at the world championships in London next month.
Sport
4 years ago

The IAAF sets a target number of entrants for each discipline‚ ranging from 56 in the 100m and 200m to 32 in the field events‚ when those numbers are not reached‚ the highest-ranked eligible athletes are invited.

Could ASA have made such a crucial mistake? Well‚ it wouldn’t be the federation’s first error in recent days.

ASA had initially chosen Hogan in the team‚ thinking he had achieved the IAAF qualifying standard‚ when in fact he hadn’t.

Then the federation said he qualified as the reigning African champion‚ only for the IAAF to reject this because Hogan had been stripped of the title after a doping offence.

Hogan‚ according to the unofficial list‚ is ranked 28th in the world‚ high enough to get him a quota invitation.

His ban ended in late June.

There could also be an invitation coming for 100m hurdler Rikenette Steenkamp‚ who missed the IAAF qualifier by one-hundredth of a second.

Dominique Scott‚ omitted by ASA in the 5000m‚ is close to invitation territory in the 1500m.

ASA imposed its own qualifying standards that were tougher than the IAAF’s.

A total of 38 SA athletes achieved the IAAF standards‚ but only 18 managed the ASA criteria.

Of the other 20‚ ASA picked six of them — five on discretion and one as a member of the 4x400m relay team. A further three athletes were added for the relay.

ASA has said its tough criteria are aimed at lifting standards and ensuring athletes can advance to the semifinals and finals at the world championships.

CAMERON van der Burgh pulled out of the 100m breaststroke heats on the opening morning of the swimming leg of the world championships in Budapest on ...
Sport
4 years ago

But Henricho Bruintjies‚ omitted from the 100m despite his 10.06 season's best‚ would have been ranked around 18th at the world championships‚ suggesting he’d easily make the top 24 for semifinals.

He made the semifinals at the last championships in Beijing in 2015.

Nations can enter a maximum of three per event‚ which effectively disqualifies scores of Americans and Jamaicans in the sprints as well as Kenyans and Ethiopians in the longer races.

The irony is that compatriot Anaso Jobodwana is just three spots away from a quota invitation with a 10.19 season’s best‚ despite having had a largely forgettable year.

The fact that he is closer to a spot in London than Bruintjies suggests problems with ASA’s selection policy.

ASA has indicated it would accept quota invitations.

Yet they are an inferior manner of qualification than the IAAF standards.

An IAAF spokesman said the quota invitations were "expected to be concluded by the end of this week".

The SA team so far is: