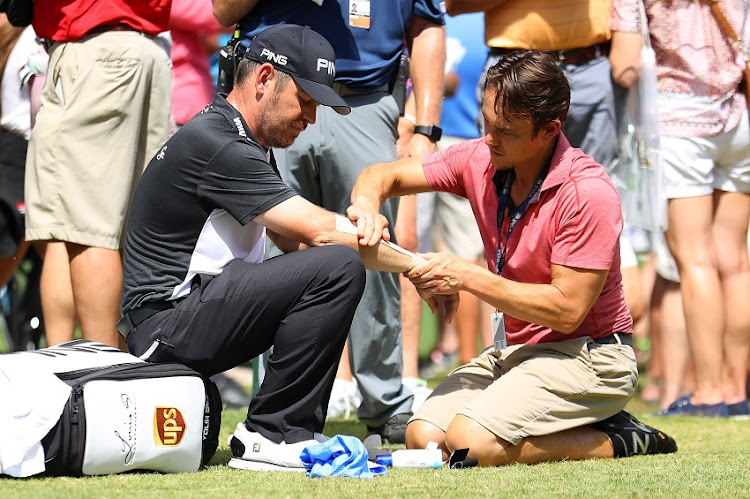 Louis Oosthuizen of South Africa receives treatment on the course after an arm injury on the second hole during the third round of the 2017 PGA Championship at Quail Hollow Club on August 12, 2017 in Charlotte, North Carolina.
Image: Getty Images

Louis Oosthuizen avoided a potentially serious injury and a bent eight-iron to move to within two shots of the lead at the US PGA Championship at Quail Hollow Club in North Carolina on Saturday.

Playing the second‚ Oosthuizen’s drive nestled close to a tree.

From a difficult stance the 34-year-old South African took a full swing at the ball‚ hitting a concealed tree root in the process.

He immediately clutched his right arm after the jarring and several minutes later called for a physio.

“It's fine‚ it wasn't hurting at all‚” Oosthuizen told reporters after carding an even-par 71 to remain at five under at the season’s fourth major‚ and two shots off the lead.

“I didn't feel like it was painful or anything. It just got tight really quickly. I thought it would be good to get the physio and release it. He just did a proper release of it. There was no pain. I could hit my shots‚ no worries.”

His eight-iron was completely bent out of shape from the impact but Oosthuizen didn’t notice until he needed the club again – on the ninth.

“I stood on nine and that was the first time I used it [the eight-iron] again‚” Oosthuizen said.

“I looked down and I could see it was completely bent. I tried to fix it‚ but obviously I'm no good at that. I didn't it a very good shot.

"I sent it to the clubhouse and they tried to fix it‚ but it was just right in the hozzle‚ where the shaft goes in. Ping is already building me a new one and getting it to me.”

On another difficult scoring day on the slick greens Oosthuizen’s even par round saw him close on second round leaders Kevin Kisner and Hideki Matsuyama‚ who came back to the field.

American Kisner‚ slipped from eight-under to seven-under after a third round 72‚ but remains one-shot clear of Japan’s Matsuyama‚ who returned a 73 and American Chris Stroud who also carded an even par 71.

Quail Hollow’s famous three closing holes at 16‚ 17 and 18 are known as the “Green Mile’ and they hurt several players in the field.

Australian Jason Day‚ who started the round at six-under‚ finished the day at even par after a calamitous quadruple bogey on the 18th.

Kisner had moved to 10-under after birdies at the 14th and 15th before a double bogey at the 16th after he found the water stunted his momentum.

He parred the 17th but on 18‚ his second shot found the brook that runs alongside the green. Kisner enjoyed a fortunate bounce off a rock that carried the ball out of the hazard.

From a difficult lie in the rough he could only make bogey‚ which was a boost for the likes of Oosthuizen going into Sunday’s final round.

“You can go in [to the Green Mile] three behind and you can still win it with those holes‚” Oosthuizen said.

“It's the type of golf course you don't have to go out and make birdies. You just need to keep everything together.

"If I can have a solid start tomorrow and get to the 14th hole and see where I am‚ anything can happen from 14.

“You just have be patient the whole day tomorrow [Sunday]. I think everyone is going to make a few mistakes out there. It's that type of golf course where you can easily make bogeys.

"You need patience and have to play yourself in a position with four or five holes to go and take it from there.”