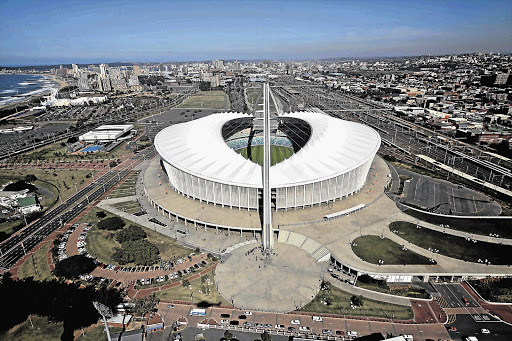 I had the privilege of attending the 10th biennial meeting of the International Forum on Elite Sport in Durban last week. The forum is run by the Association for Sport Performance Centres and brings together people from around the world who manage and run high-performance environments for elite athletes.

I attended the meeting for one day only, but met people from Nigeria, Germany, Israel, Japan, Finland, the US, France, Holland and India.

Seventy-five Olympic/Paralympic training centres and high-performance sports institutes from around the world, supporting more than 100,000 elite athletes, means that the Moses Mabida Stadium in Durban had perhaps the greatest concentration of elite sporting minds anywhere on the planet for three days.

But one speaker stood out, as he always does. Roger Barrow is the high-performance director of Rowing SA, which I believe is the best-run high-performance sport in South Africa. I say that because its success despite absolute "poverty" compared with its major rivals, in a sport that is notoriously expensive, is nothing short of miraculous.

Hancock and Masuthu scoops medal at world under-18 rowing champs

Our Springboks Sevens' set-up is equally elite, but they don't compete on a budget that is only 5% of their rivals'. SA Rowing gets about R30-million per Olympic Games cycle. Great Britain get R149-million. Per year. A jaw-dropping comparison.

I've known Barrow for nine years, since the disastrous Beijing Olympics, when he took over the helm. He went on to win that famous gold medal in London and got six out of six boats into finals in Rio, winning one silver medal. He now has a dominant female sculler, who is a big favourite to win gold at the coming world championships, and a few more boats with medal opportunities.

SA Rowing, as of last week, has a sponsorship with RMB, which may help retain talent long enough to win medals in Tokyo in 2020.

The big issue is champion retention. We speak often of rugby's talent drain to the UK, but Olympic sports in South Africa have it worse. Only they don't lose talent to the foreign markets, they lose it to other careers, because sport does not offer them a viable one.

Thabelo has ducks in a row

Medallists and Olympic finalists are torn between continuing in their sport, or choosing another career. By the age of 25, that's a very difficult choice to make - think about family pressures, financial planning and career "security". It's no surprise, then, that after Rio, Barrow had to rebuild after losing rowers at the theoretical peak of their careers.

Imagine it were possible to keep those men and women in the sport for four more years. Their passion makes it comparatively cheap - they don't need Floyd Mayweather-like pay-cheques , but livable salaries, housing and medium-term security. They'll row for gold medals if the system would just provide those assurances and rewards.

That's a wonderful attitude in a world of limitations

It really does make you wonder: "What if?" And if you wonder that about rowing, then wonder the same about kayaking, triathlon, table tennis and even track and field, where we're riding high at present thanks to Caster Semenya, Wayde van Niekerk and Luvo Manyonga.

Barrow ended his talk with the story of a World Cup regatta in Switzerland, where one of his best teams finished fourth, only 0.02 seconds behind the third-placed team. His mindset? The 0.03s he needs to win a medal is not because of money.

And so he goes to the US's World Championships at the end of next month driven to find five "tweaks" to turn a narrow fourth into a medal of some colour.

That's a wonderful attitude in a world of limitations. But from the perspective of sports administration, it's yet another illustration of potential that could be realised with small nudges. And that is a call to action - if Barrow and South Africa's best rowers can overcome a lack of resources, then so too can all sports, with a little more purpose and, dare I say, support to keep talent in the sport.