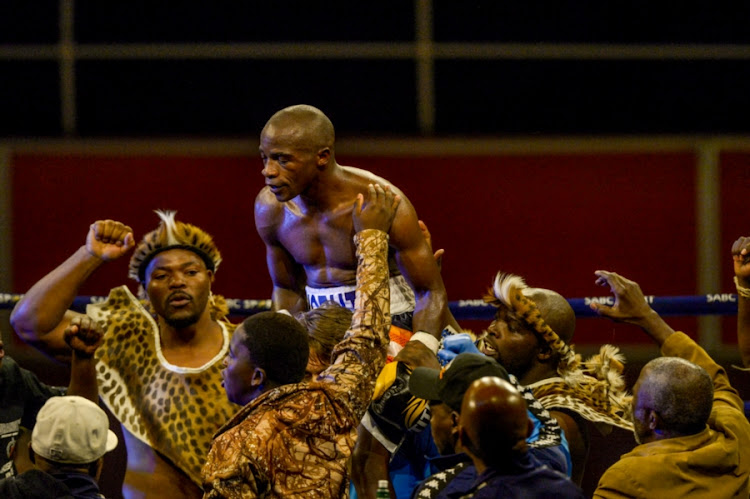 Moruti Mthalane hoisted high as he wins by TKO against Genesis Libranza during the Boxing from Wembley Arena on April 28, 2017 in Johannesburg, South Africa.
Image: Sydney Seshibedi/Gallo Images

At 35‚ Moruti Mthalane seems too old for his Babyface monicker‚ but he insists he is still the best flyweight on the planet.

He has the chance to back up his claim at the Mmabatho Convention Centre in Mahikeng on Friday night as he embarks on a new journey to win back his old IBF world title.

Mthalane and Filipino Ardin Diale battle for the IBF’s lesser International title‚ which Mthalane believes‚ if he’s successful‚ will catapult him into either a world title challenge or an eliminator for the crown he gave up a few years back because he couldn’t get decent offers to defend it.

The father-of-one‚ who relinquished his IBO belt for this opportunity‚ has never given up on his boxing dream despite a drought of bouts in recent years.

That he has stayed in the flyweight class since turning professional 17 years ago is testament to his discipline.

“I believe I am the top flyweight. There are good champions‚ but I do believe if I would fight one of them I would win‚” he said this week after a hard training session at Colin Nathan’s Hot Box gym in Johannesburg.

He apologised for being drenched in sweat.

One of the true gentlemen of SA boxing‚ Mthalane spoke highly of his opponent‚ although not too highly.

“He’s a good boxer‚ a dangerous boxer‚ but I will beat him.”

“The Jackal”‚ as Diale is known‚ lost in his bid for the WBO version of the flyweight title in 2011‚ getting stopped by Julio Cesar Miranda.

Mthalane‚ who beat Miranda for the vacant IBF crown in 2009‚ said other world champions had ducked him when he was the champion with his previous trainer/manager‚ Nick Durandt.

“[He] tried to unify‚ nobody agreed.”

Mthalane has held four titles in his career‚ also including the SA and WBC International belts‚ and he’s never lost one in the ring‚ relinquishing all of them.

His last defeat came against Filipino star Nonito Donaire‚ then the IBF flyweight champion‚ in Las Vegas in late 2008‚ when the bout was stopped in the sixth round after he suffered a cut on his left eyelid.

“He said to me after the fight I was the most difficult opponent he had faced.

"He told me I would become a world champion‚” recalled Mthalane‚ who has fulfilled that prophecy twice since.

Now he’s hoping to do it a third time.

Former Test veteran Mark Boucher has thrown his weight behind the retention of the five-day Test format.
Sport
4 years ago

The critics said Azinga Fuzile couldn't punch, but he looked like a heavyweight as he demolished Tshifhiwa Munyai in three rounds at Emperors Palace ...
Sport
4 years ago

Moruti “Baby Face” Mthalane has relinquished his International Boxing Organisation (IBO) flyweight belt because he will be involved in an ...
Sport
4 years ago

Azinga Fuzile fights on Saturday night and then begins his matric final exams three days later‚ but the East London schoolkid was in fine bluster on ...
Sport
4 years ago

Inactive ex-champion Vetyeka says if hunger is a motivator, he's got enough to see off lethal challenger.
Sport
4 years ago