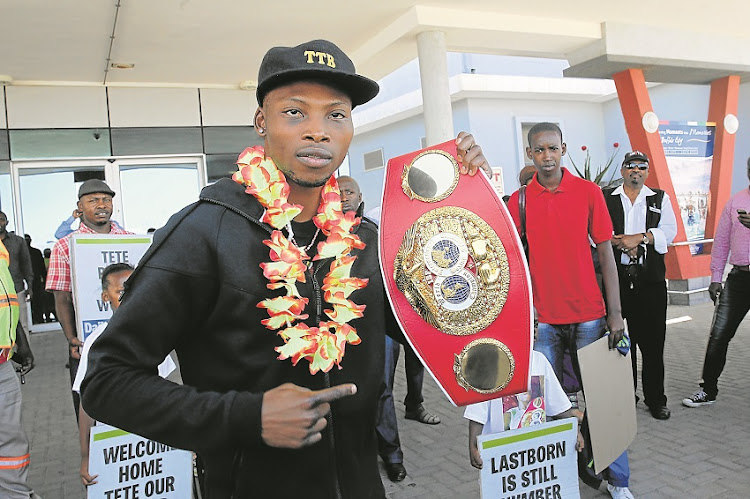 Will Siboniso “Tiger” Gonya’s dream of challenging for the world title quickly turn into a nightmare?

The little-known challenger from KwaZulu-Natal thinks he has what it takes to relieve countryman Zolani “Last Born” Tete of the WBO bantamweight title when they fight in Belfast on Saturday night.

The two southpaws will be the first South Africans to fight for a world title abroad.

Tete‚ with a record of 25 wins‚ 20 by stoppage‚ and three losses‚ reiterated that he expected to see off Gonya‚ 11-1‚ in four rounds.

“I must get it over and done with it in four rounds‚” said Tete‚ who is based in East London.

“Siboniso is a good boxer who deserves to be in such a fight but not against me. I honestly think this fight against me came too soon for him.”

Gonya was unfazed‚ instead reminding Tete of what underdog James “Buster” Douglas did to hot favourite Mike Tyson back in 1990‚ knocking the then unbeaten world heavyweight champion out in the 10th round.

“Tyson took that fight as a warm up because he had already signed to defend his belts (IBF‚ WBC and WBA) against Evander Holyfield.”

Gonya‚ who has left only three of his 11 victims gasping for air‚ was picked by Tete‚ who is enjoying a voluntary defence.

Gonya started calling out Tete just after that.

“I have wanted this fight badly for some time and I am delighted that I finally have the chance to test myself against Tete‚” he said.

“Tete is a very good champion who has won two titles in two weight division [the other being the IBF junior bantamweight belt] and he is one of the most avoided fighters in the world.

“Other boxers avoided him. I am happy to get this opportunity to take his world title from him.

“I know that people do not give me a chance and that makes me feel good because there is no pressure‚ but I believe I have what it takes to win the title from him.”

The fight will take place on the undercard of the return of former featherweight and junior-featherweight world titleholder Carl Frampton‚ who takes on Horace Garcia in a non-title fight.

Tete is already eyeing a unification fight with IBF and WBA champion Ryan Burnett‚ a Belfast native who is expected at ringside on Saturday night.

“I believe myself and Burnett would provide fans with a brilliant fight. I know the people of Belfast love their boxing and hopefully this is a fight that can be made when we both come through our next fights.

“For now all of my focus is on Siboniso Gonya.”