WATCH | Record-breaking Tete gets hero's welcome on return to SA 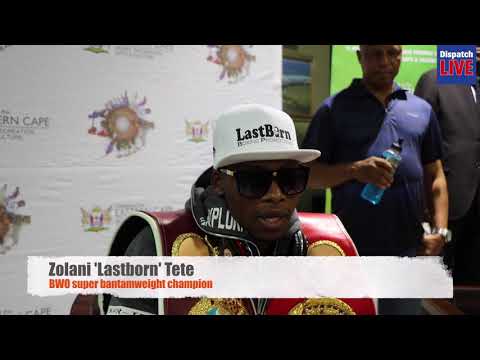 New world record holder Zolani Tete arrived home on Monday to a hero's welcome at the East London Airport before being whisked away to the city hall for a formal reception.

Tete set a new world boxing record for the fastest fight when he knocked out KwaZulu-Natal challenger Siboniso Gonya in 11 seconds to retain his WBO bantamweight title at SSE Arena in Belfast‚ Northern Ireland‚ on Saturday.

Tete admitted he was surprised the fight ended so quickly.

“Once the bell sounded to start the fight my aim was either to throw a stiff jab or a hook‚” he said.

“I opted for the latter and it was lights out. I could feel in my knuckles that Gonya was never going to get up.”

Gonya took close to six minutes being revived by medical personnel before finally making it to his feet to Tete’s relief.

“I was worried about him and I could not even celebrate after knocking him out. But thankfully he is fine and he is back home safely."

Tete said he would chase for unification clashes against other champions in the division including Irish boxer Ryan Burnett‚ who strangely did not attend the fight even though it was held in his backyard.

Burnett holds the IBF and WBA crowns but is promoted by the rival of Tete’s promoter‚ Eddie Hearn‚ which might make a unification bout a bit tricky.