Sharks won't chow us‚ say ‘Mad Swimmers’ as they set off 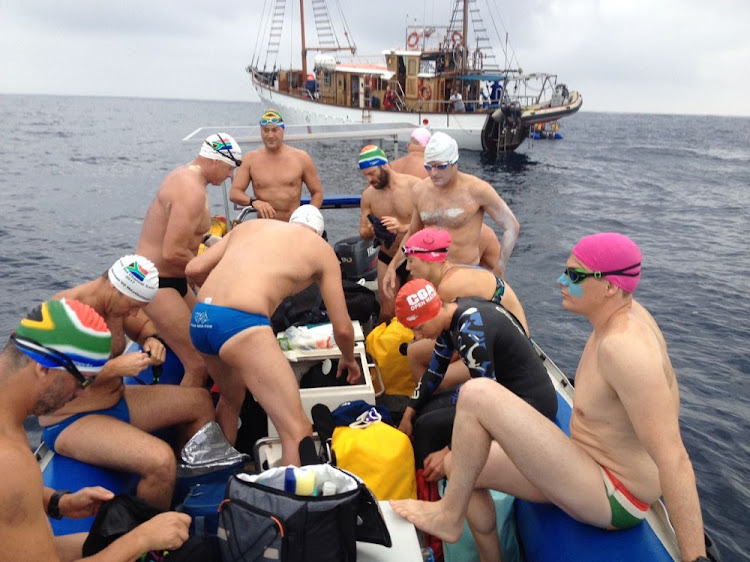 Some of the swimmers about to jump off a rubber duck just before the start, with the Wild Oceans support vessel Angra Pequena in the background.
Image: Supplied

On Saturday morning at first light‚ 20 intrepid swimmers leapt into the sea south of Durban to prove‚ firstly‚ that they are not afraid to swim among sharks. Secondly‚ they are attempting to swim 100km in a single day – an almost impossible task‚ unless the weather and sea conditions are absolutely perfect.

On Saturday morning at first light‚ 20 intrepid swimmers leapt into the sea south of Durban to prove‚ firstly‚ that they are not afraid to swim among sharks. Secondly‚ they are attempting to swim 100km in a single day – an almost impossible task‚ unless the weather and sea conditions are absolutely perfect.

Mad Swimmers founder Jean Craven says the success of the Great Shark Swim will all depend on whether the strong Agulhas current is able to give them the extra momentum needed to swim at double the speed that most strong swimmers are capable of over such a long distance.

“As far as we know‚ swimming 100km in a single day (dawn to dusk) has not been attempted before‚” said Craven‚ a Johannesburg-based commodities trader who founded the Mad Swimmers eight years ago after taking a bet with friends that he could swim from Europe to Africa.

Craven and a group of friends completed the 17km swim from Spain to Morocco in just under four-and-a-half hours and decided immediately to donate their winnings to a variety of children’s charities and orphanages.

Since then‚ the Mad Swimmers have set several records‚ including the highest and lowest swims in the world - the former at almost 6‚000m in an icy lake in the Andes mountains‚ and the latter by crossing the Dead Sea (464m below sea level) from Jordan to Israel. Several members have also swum between continents‚ including an Asia to North America crossing through the Bering Sea.

The night before they set off‚ the 20 swimmers – 15 from South Africa‚ four from Israel and one from Spain – met in Durban to make a final decision after months of planning to determine the perfect swimming weather window.

Lisa Guastella‚ a Durban-based oceanographic and meteorological consultant‚ told the swimmers that the Agulhas current was one of the strongest in the world‚ moving at almost 2m a second on a good day.

However‚ there were times when local eddies and oceanic pulses could lead to much slower conditions‚ including a reverse current. Guastella said while conditions were “nearly perfect”‚ she was bit concerned that the wind might come up in the late afternoon and that the current was not running as fast as she hoped. But a huge cheer broke out when a decision was made to “go for it!” anyway.

Asked what he felt about the risk of shark attack‚ Cape Town swimmer John Dickerson (a lawyer) said his friends had remarked rather unkindly that the sharks were probably more at risk if he was going swimming.

Local diver and photographer Allen Walker‚ who showed them some of the underwater photographs he had taken of sharks just 10cm away from his camera lens‚ said he had never been attacked or bitten – including an occasion when great white and tiger sharks were feeding on the carcass of a whale and on another occasion when approximately 400 sharks were feeding on a large sardine “baitball”.

“My advice to you is not to worry about sharks. Sharks are pretty cool animals – so just focus on the swimming.”

Craven said while some swimmers were more nervous than others‚ none of the Mad Swimmers would be carrying any shark deterrent devices. Over the last eight years the swimmers had raised over R8-million for child welfare.