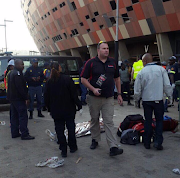 Image: Supplied The scene outside FNB Stadium after the stampede that killed two people.

The commissions of inquiry into a stampede at a pre-season Soweto derby at FNB Stadium in July and into allegations of misconduct at Sascoc are expected to hold between January and March next year.

Sports Ministry Chief Director of Marketing and Communications‚ Mickey Modisane‚ confirmed to TimesLIVE on Thursday afternoon that the inquiry into the events that led to the deaths of two people and left 21 injured at FNB Stadium will be led by Judge Ronnie Pillay and will include Eugene van Vuuren and Masilo Maake.

The inquiry into allegations of misconduct at Sascoc will be led by Judge Ralph Zulman and it will include Dr Ali Bacher and Shamina Gaibie.

The commissions intend to conduct public hearings at a suitable venue commencing from January 15 to March or for a duration of two and a half months depending on the submissions they receive.

“The commission is currently looking at venues in close proximity to where the above-mentioned incidents occurred‚ especially closer to FNB Soccer City‚" Modisane said.

"The above investigations are in the best interest of the public‚ sport in general‚ and safety of spectators in terms of compliance with SASREA.

"The department is currently finalising with two stadiums in and around Johannesburg for the sittings of both inquiries.

"These inquiries will be open to the public‚ hence the venues will be able to cater for capacity sitting of at least 100 to 150 persons per inquiry‚ inclusive of the media covering print and television.”

Both inquiries are scrutinizing all representations received via media adverts to decide who‚ when‚ where and for what purpose will people who have submitted their written representations be invited to present their evidence in January.

“So far‚ enough submissions have been received and both commissions are ready to commence with both hearings.

“Both venues will have ample parking space to cater for both public and media for the duration of the hearings.

"By estimation‚ the commissions should hopefully be able to conclude their assignments within a period of 2 months as from 15 or 22 January 2018. In other words until 15 March 2018 at the most.

"It is foreseen that both commissions of inquiry will commence with their respective mandates in January as their terms of references have been published in the Government Gazette.

"Both commissionss will firstly invite persons to testify at the public hearings and should they fail to attend‚ they may be subpoenaed‚” Modisane said.