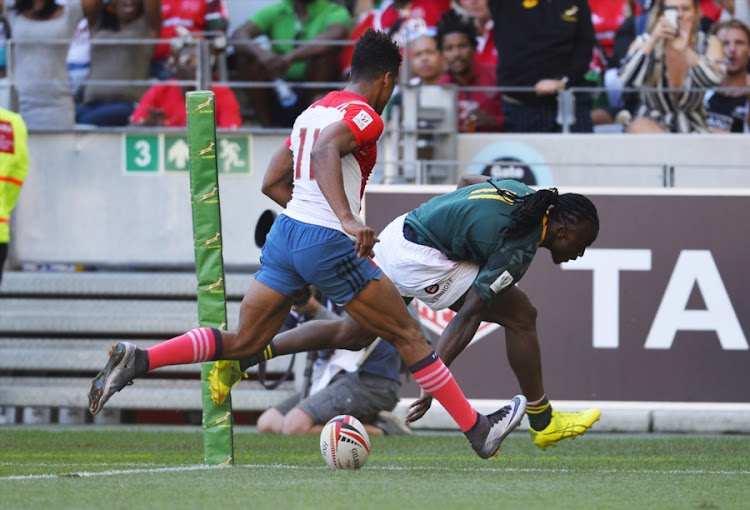 Seabelo Senatla became the fifth and fastest man in history to score 200 tries in the HSBC World Sevens Series when he scored during the Blitzboks’ 31-5 win over France on Saturday.

Victory over the French moved the Blitzboks to top of the Pool A standings at the Cape Town Sevens – the second event of the series – after an earlier 40-5 win over Russia. The win all but secured SA a place in the quarterfinals.

Senatla, 24, became the first South African to reach 200 tries when the teammate Justin Geduld put him away a minute from the end of the match against France. In the process he also reached 1000 Series points.

Senatla reached his milestone in only his 35th tournament and his 175th game, 16 tournaments fewer than previous record holder, England’s Dan Norton, took to reach 200 tries.

Against France Kwagga Smith opened the scoring for the home team in a tight first half that also saw Les Blues score through Stephan Parez, to give SA a 7-5 lead at the break.

After halftime though, it was all SA as captain Philip Snyman used guile to beat the French defence for the team’s second try.

Forward Chrus Dry added a third before Senatla brought the 55000 crowd to its feet with his record touchdown.

The crowd were again in raptures when Ruhan Nel used a potent hand-off twice to remove French defenders on his way to the Blitzboks’ fifth try after the final hooter had sounded.

In other notable scores the USA beat Australia 31-14 after thrashing New Zealand 22-0 earlier in the day to sound a warning that they are serious title contenders.

Seabelo Senatla scored a hattrick as the Blitzboks made a strong start to the Cape Town leg of the World Sevens Series by beating Russia 40-5.
Sport
3 years ago

After shaking off the rust in Dubai last week‚ all teams will be an optimum level for the second leg of the 2017-18 World Series in Cape Town ...
Sport
3 years ago

Blitzbok coach Neil Powell has picked the same 12 players that won in Dubai last week for this weekend’s second leg of the HSBC World Sevens Series ...
Sport
3 years ago