Bolt says Wayde is awesome‚ but he's no sprinter 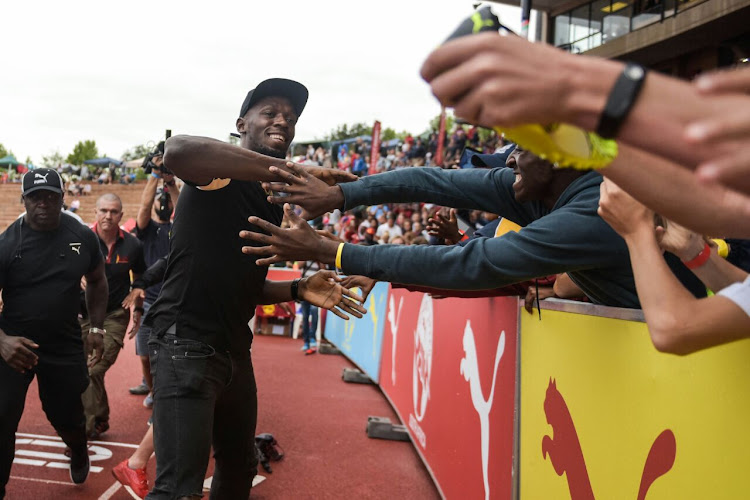 The retired Jamaican legend sat at the front of a news conference packed with South African journalists on Monday and told them clearly: the country’s premier track star is no speedster.
Image: Alaister Russell

Usain Bolt on Monday used the words awesome and brilliant to describe Wayde van Niekerk‚ but the one descriptive he refused to use was sprinter.

The retired Jamaican legend sat at the front of a news conference packed with South African journalists on Monday and told them clearly: the country’s premier track star is no speedster.

Van Niekerk is the Olympic and double 400m world champion‚ and he’s the world record-holder over the distance. He also picked up the 200m silver at the world championships in London last year.

But the world’s fastest man doesn’t rate him as a sprinter — his 100m world record is 0.36sec faster than Van Niekerk’s best‚ and his 200m mark is 0.65 quicker than the South African’s national record.

Asked to name his top five sprinters of all time‚ Bolt put himself at the top of the list‚ followed by Americans Michael Johnson‚ the former 200m and 400m world record-holder‚ and “Maurice Greene for sure”‚ and then compatriot Asafa Powell.

Before Bolt could spit out his No5‚ the compere butted in: “You’d better say Wayde van Niekerk.”

“He’s not really a sprinter‚ is he?” retorted Bolt. “He wants to be a sprinter.”

“He’s not really a sprinter.”

“Talk to his coach and hear what his coach says‚” insisted Bolt. “I promise you‚ he’s been trying to convince her for the longest time to make him a sprinter.”

Bolt’s fifth pick was the man who brought Jamaican sprinting to the world’s attention in the 1970s‚ Don Quarrie.

Bolt and his camp have hosted Van Niekerk and SA’s premier 100m sprinter‚ Akani Simbine‚ in training camps the past two years‚ and they enjoy a good relationship.

Bolt spoke about the moment he watched Van Niekerk smash Johnson’s 400m record at the 2016 Rio Games‚ when he went 43.03.

“I wasn’t really surprised. The first year when he came to Jamaica we all trained together‚ I was saying to my coach that … when he’s ready he can break the world record.

“When it happened it wasn’t a surprise‚ it was the fact that he almost ran 42 that I was surprised about. That was just brilliant‚ he’s an awesome athlete.”

Simbine was also at the media conference at the Ruimsig athletics track in Roodepoort‚ where Bolt’s sponsor‚ Puma‚ staged a school of speed meet to unearth young talent.

Bolt is the school’s worldwide principal and Thando Roto‚ another SA sprinter with a sub-10 to his name‚ is the South African vice-principal.

Bolt and Simbine‚ who faced off in the 100m finals at the 2016 Olympics and 2017 world championships‚ had been messaging each other since the Jamaican touched down.

“He called me today to say he’s in Joburg and that I should come see him‚ so I said ‘cool’.”

Simbine added with a laugh that Bolt‚ however‚ had ensured he wasn’t interfering with his training programme.

Retired athlete Usain Bolt jetted into Mzansi on Friday ahead of the Sun Met this past weekend and told TshisaLIVE that he felt right at home.
TshisaLIVE
4 years ago

Retired Jamaican athletic superstar Usain Bolt joined Mamelodi Sundowns at training on Monday morning and showed a glimpse of what he can do on a ...
Sport
4 years ago

Minnie Dlamini has been living her best life and has a lot planned for 2018, starting with hosting star athlete Usain Bolt at the Sun Met South ...
TshisaLIVE
4 years ago