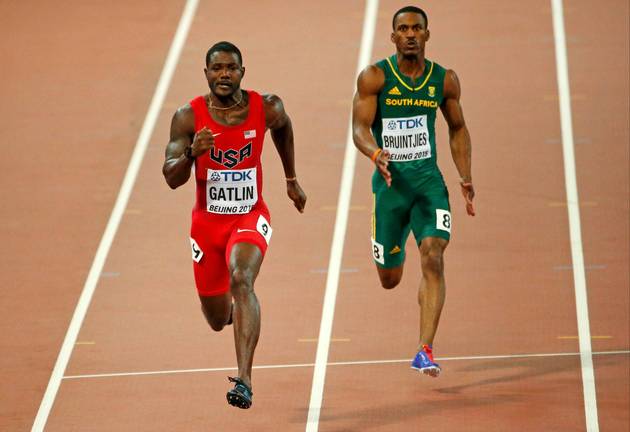 Justin Gatlin of the US (L) and Henricho Bruintjies of South Africa compete in the men's 100 metres heats during the 15th IAAF World Championships. File photo
Image: DAVID GRAY

Reigning world 100m champion Justin Gatlin has been confirmed as the latest big-name to confirm his entry in the inaugural Athletics SA's (ASA) Athletix Grand Prix series next month.

According to the organisers‚ the 35-year-old American sprinter will line up in a rarely run 150m event at Tuks Stadium in Tshwane on March 8 in the second leg of the track and field meet that ASA launched in December last year.

“I have obviously done 150’s in training‚ but have never raced over that distance before‚" Gatlin said in a statement on Thursday morning.

"It will be interesting to see how I do.

"It is also my first race of the season‚ which adds to the excitement for me.”

“Having Justin Gatlin running in South Africa is a big coup for us‚” ASA president Aleck Skhosana said in a stament.

“We have such incredible depth in the sprints in South Africa.

"To have an athlete of Justin Gatlin’s calibre compete here against our athletes means that the world sees us as a major contender in the sprints.

"It also brings other great benefits as it inspires other aspiring sprinters and beyond.

"It also inspires coaches to produce the calibre of sprinters along the likes of Gatlin and Akani Simbine.”

The Ugandan star will run at the first two events‚ according to the organisers - at Ruimsig Stadium‚ Johannesburg on March 1 and Tuks Stadium on March 8.

The final leg will take place at Dal Josaphat Stadium in Paarl‚ Western Cape on March 22.

Sports minister Thulas Nxesi dropped everything to rush to meet Usain Bolt in Johannesburg on Monday — he must have been in such a hurry he ...
Sport
4 years ago

Bolt says Wayde is awesome‚ but he's no sprinter

Usain Bolt on Monday used the words awesome and brilliant to describe Wayde van Niekerk‚ but the one descriptive he refused to use was sprinter.
Sport
4 years ago