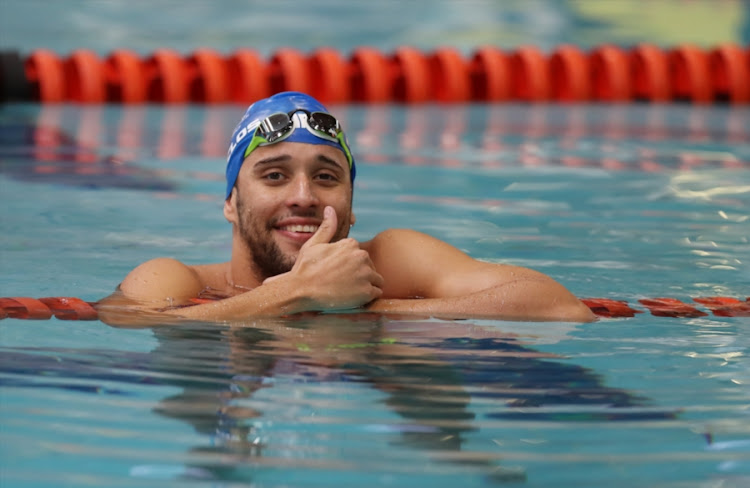 Chad Le Clos is “pretty upset” that South Africa’s selection criteria could rob him of the chance to become the most decorated medalist in Commonwealth Games history.

He is planning on competing in four individual races at the 2018 edition in Gold Coast‚ Australia‚ from April 4-15 — and was counting on podium finishes in two relays‚ the 4x100m freestyle and medley‚ to lift him to 18 medals.

But three key teammates he needs to power SA to silverware in those relays were not included in the SA Games swimming team of 23.

“There were guys who weren’t selected for the team which I’m pretty upset about‚” Le Clos said in Cape Town before heading to training base in Turkey on Monday.

“I don’t want to mention any names … there were some guys I asked to go on the team. Some of the guys couldn’t make trials because they were studying overseas.”

Competing at the trials in December was a requirement for selection‚ but two of SA’s top swimmers — backstroker Christopher Reid and freestyler Zane Waddell — didn’t make the trip back from the US‚ where they are studying.

Leith Shankland‚ who did compete at trials‚ is believed to be the third swimmer Le Clos is referring to.

Pointing out that some smaller swimming nations allowed some stars a free pass on qualification for certain events‚ Le Clos argued that this should be about the medals.

He has previously said he wants SA to return to fifth on the medals table from seventh place.

That means every gold medal will count.

“We’re challenging for gold in that medley relay‚” said Le Clos‚ pointing out that with Cameron van der Burgh in the second breaststroke leg and himself in the third fly leg‚ “on paper‚ we’re the best middle [200m] in the world”.

“In that 4x100m freestyle it’s very difficult to beat Australia in Australia‚ but it’s a silver‚ minimum bronze.”

“We always step up in the relays. For us not to be taking our best team‚ which will give us such a good shot‚ it’s sad.”

SA has won Games medals in the 4x100m freestyle relay at the past four showpieces.

“Maybe I’m being selfish‚ but my legacy is on the line here. But when I get six [more] medals‚ I’m the best ever at 25 years old. Three Games.”

Gault and Adams amassed their medals over six Games.

Le Clos said he was even prepared to pay for the three to go to the Games‚ although the sticking point is that there are only 100 individual spots for SA‚ and they’ve already been allotted.

“I’ll even go as far to say I’ll raise the money‚ I’ll pay for them to come‚” said Le Clos.

“I’ve spoken to them. They’re happy to stay outside the village. They’d be happy to compete in just the relays‚” added Le Clos, stressing that he did not want to displace any of his swimming teammates.

“I want to be the best ever in the Commonwealth‚ I want to be one of the best-ever Olympians.

"I’m working towards that every day‚ I’m training for that. For me to be shut down‚ because it’s something that could have been there‚ it’s [sad]‚” he said‚ shaking his head.

Le Clos said he didn’t want to have to bank on reaching the record in Birmingham.

“When you have the chance to break the record you must go for it. You can’t say ‘oh well‚ I’m going to wait for next year’.

"You don’t hold back‚ you go for it. You never know‚ I could break my leg tomorrow … I’ve got to just take these opportunities while I can.”

This is not the first time that SA has chosen rules over medals.

In 1998 Penny Heyns was left out the team for Kuala Lumpur‚ which cost them two medals — she instead went to the Goodwill Games in New York and set the world 50m breaststroke record.

The ministerial committee of inquiry into governance issues at the SA Sports Confederation and Olympic Committee (Sascoc) faces the task of ...
Sport
4 years ago

The SA Sports Confederation and Olympic Committee (Sascoc) was dysfunctional‚ the ministerial committee of inquiry into governance issues at the ...
Sport
4 years ago

All eyes will be on retired Judge Ralph Zulman when the long-awaited inquiry into allegations of misconduct at Sascoc finally gets underway at the ...
Sport
4 years ago