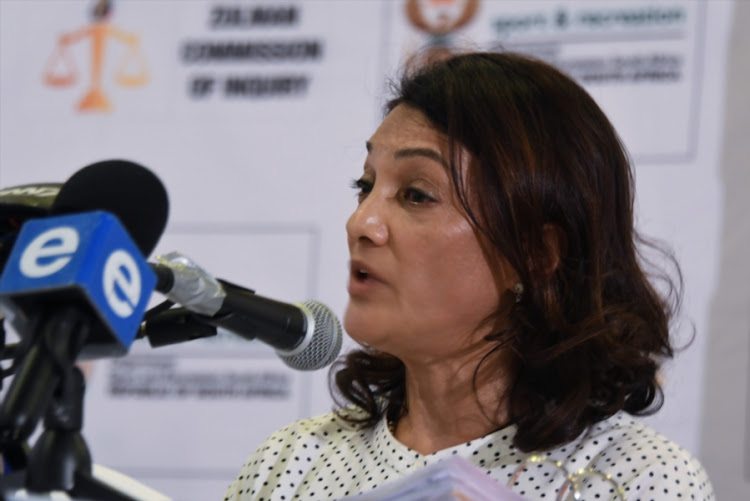 Desiree Vardhan‚ in charge of coaching at Sascoc‚ told the minesterial inquiry on Monday February 12 2018 that the environment at work was “very toxic and threatening” and innovation was shunned.
Image: Wessel Oosthuizen/Gallo Images

The ministerial committee of inquiry into governance issues at the SA Sports Confederation and Olympic Committee (Sascoc) faces the task of separating fact from fiction‚ relevance from tangents.

This much was evident on the opening day on Monday.

Former Athletics SA (ASA) board member Laraine Lane was emotional as she gave testimony about her experiences with Sascoc.

Lane was on the board when Caster Semenya won world championship gold in the 800m in Berlin in 2009 with her gender under global scrutiny.

Semenya didn’t compete again until investigations were completed in July 2010.

Lane told the committee on Monday that it was Sascoc and not the IAAF‚ the world governing body for athletics‚ that had barred Semenya from competing while she was being tested at that time.

“They [IAAF] said Caster could run in the interim. Sascoc refused her permission.”

But was Lane right?

In a statement released on July 6 2010‚ the IAAF said: “The process initiated in 2009 in the case of Caster Semenya has now been completed.

“The IAAF accepts the conclusion of a panel of medical experts that she can compete with immediate effect.

"Please note that the medical details of the case remain confidential and the IAAF will make no further comment on the matter.”

At the time‚ Semenya’s lawyer‚ Greg Nott‚ said there had been protracted negotiations with the IAAF‚ with meetings in Monaco‚ Istanbul and Paris.

Semenya competed in Lappeenranta‚ Finland‚ nine days after the IAAF released the statement.

Lane also told the committee the late Banele Sindani‚ a former CEO at both Sascoc and ASA‚ had told her that Sascoc deputy president Hajera Kajee was related to Sedgars‚ a company that does business with Sascoc.

Kajee denied this when approached for comment later on Monday.

Another witness‚ Willie Meyer from wrestling‚ on Monday accused Sascoc of breaking the Olympic Charter.

He appeared to struggle to articulate himself clearly‚ but it seems the point he was trying to make could become a common thread at this inquiry.

Meyer seemed to be complaining about Sascoc’s Olympic selection criteria‚ which left out many sports people who qualified for the 2016 Rio Games.

Sascoc refused to accept easier African qualifying standards for all codes with the exception of football and road cycling.

While there has been much unhappiness over this‚ especially among the smaller codes that were excluded from the Games‚ most of those federations signed agreements on qualifying standards with Sascoc.

Lane and others have described senior Sascoc officials as bullies‚ and perhaps these federations will need to show they were coerced by Sascoc into signing these agreements.

The presidents of hockey and boxing said they felt there was still room to negotiate after signing.

But arguing that it’s unfair to impose tough qualifying standards could prove to be difficult‚ because some countries‚ including New Zealand‚ do the same.

The SA Sports Confederation and Olympic Committee (Sascoc) was dysfunctional‚ the ministerial committee of inquiry into governance issues at the ...
Sport
4 years ago

All eyes will be on retired Judge Ralph Zulman when the long-awaited inquiry into allegations of misconduct at Sascoc finally gets underway at the ...
Sport
4 years ago

South African netball coach Norma Plummer will contact franchise and club coaches handling her Proteas players over the next two months to help ...
Sport
4 years ago