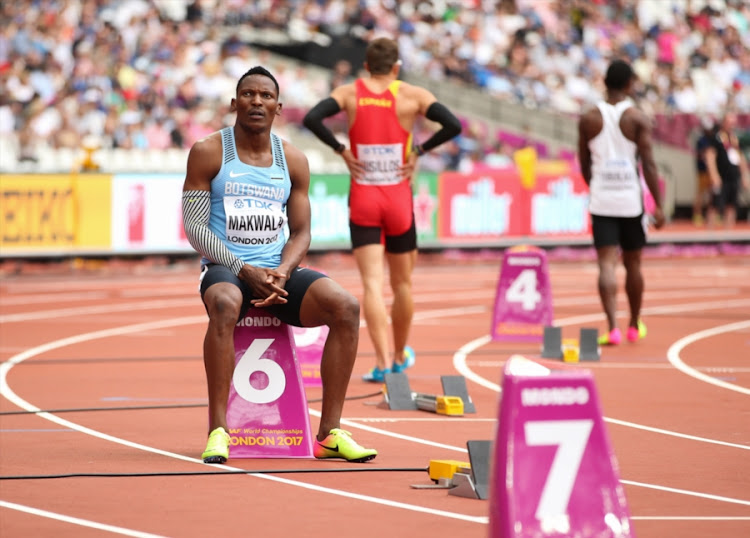 Isaac Makwala of Botswana in the heats of the men's 400m during day 2 of the 16th IAAF World Athletics Championships 2017 at The Stadium, Queen Elizabeth Olympic Park on August 05, 2017 in London, England.
Image: Roger Sedres/ImageSA/Gallo Images

Botswana sprint star Isaac Makwala will be in action in the opening meet of the Athletix Grand Prix series at Ruimsig on Thursday.

His participation in the 200m — against local heroes Anaso Jobodwana and Clarence Munyai — was confirmed on Tuesday morning by organisers who also finally announced they had a title sponsor.

Liquid Telecom — who last week announced an R8-million sponsorship for sprinter Akani Simbine to pay for his coach to quit his job and train him fulltime — is venturing wider into track and field.

Like their sponsorship of Simbine‚ this one of the series is a three-year deal‚ although this time they kept mum on the value.

World 100m champion Justin Gatlin is the stand-out foreign star who will be competing‚ although he’s running only in the second meet in Pretoria on March 8.

The series promises to be a kickback to the old Engen Series which used to attract foreign stars up until its demise exactly 15 years ago.

Makwala achieved fame at the 2017 world championships when he ran a 200m time trial on his own to qualify for the final after missing the heats because of norovirus.

Makwala was heartbroken after being prevented from entering the London stadium to compete in the 400m final — won by SA’s Wayde van Niekerk — but he became a crowd favourite after performing on his own.

The 200m is the premier event‚ with Makwala taking on Jobodwana‚ the 200m bronze medallist from the 2015 world championships‚ and high-flying youngster Clarence Munyai.

Also in the mix are Gatlin’s training partners Justin Walker and Trentavis Friday.

The other main attraction is the men’s 1500m where Uganda’s Joshua Cheptegei‚ the 10‚000m runner-up behind Mo Farah at the world championships last year‚ is in action against SA’s finest in that discipline‚ including Dumisane Hlaselo‚ Jerry Motsau and young George Kusche.

But Cheptegei’s toughest competition could come from Ronald Musugala‚ also of Uganda.