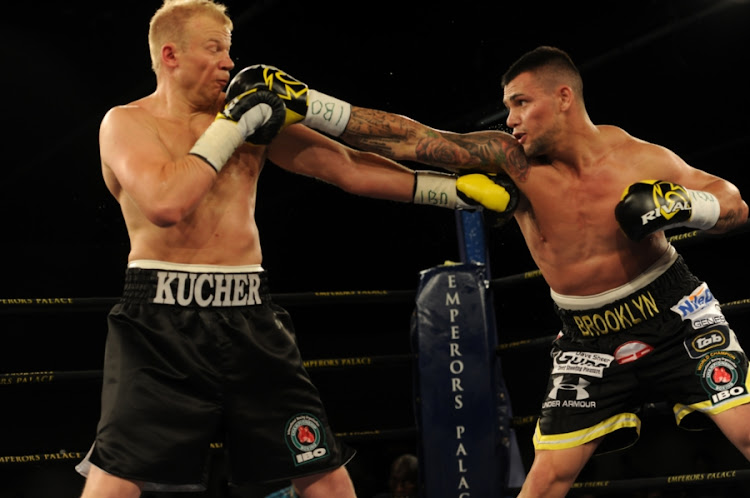 Lerena‚ cut above the right eye by a clash of heads early on and then bleeding from the nose for much of the bout‚ was too quick and busy for his more experienced opponent.

But he was able to soak up punishment for all 12 rounds‚ taking everything Mbenge could throw at him and landing a few useful shots of his own.

Mbenge may have won convincingly‚ but this wasn’t his finest performance. He started the fight by attacking the body‚ and hurt Cruz from time to time.

But he abandoned that strategy after a few rounds and instead tried sniping for the head.

It was suddenly clear that he couldn’t hurt Cruz going upstairs‚ yet he lacked the acumen to return to the body.

Mbenge also won the WBC International welterweight title and his record improved to 13-0 (10 KOs)‚ but his reputation wasn’t enhanced.

He was unable to close the gap against his taller southpaw opponent‚ who was busier and more aggressive.

But then Kriel started using his footwork‚ giving angles and beating Magusha to the punch in what was arguably the most entertaining fight of the night.

Rowan Campbell won by technical knockout when Masixole Botile quit after taking a heavy body blow in the second round.​

Is Anthony Joshua worth the hype he gets?

IS Anthony "AJ" Joshua the heavyweight division's last hope or is the UK boxer with a keen interest in football just the pretender to the throne ...
Sport
3 years ago

Zolani “Last Born” Tete deservedly walked away with the most sought-after Boxing South Africa 2017 Boxer of the Year award at the Boardwalk Casino in ...
Sport
3 years ago

Kevin Lerena wants to fine-tune his killer instinct when he takes on Dmytro Kucher of Ukraine at Emperors Palace on March 3.
Sport
3 years ago

Boxer Mzuvukile "Old Bones" Magwaca's career hangs in the balance after he was shot during a robbery at home in Khayelitsha last week.
Sport
3 years ago