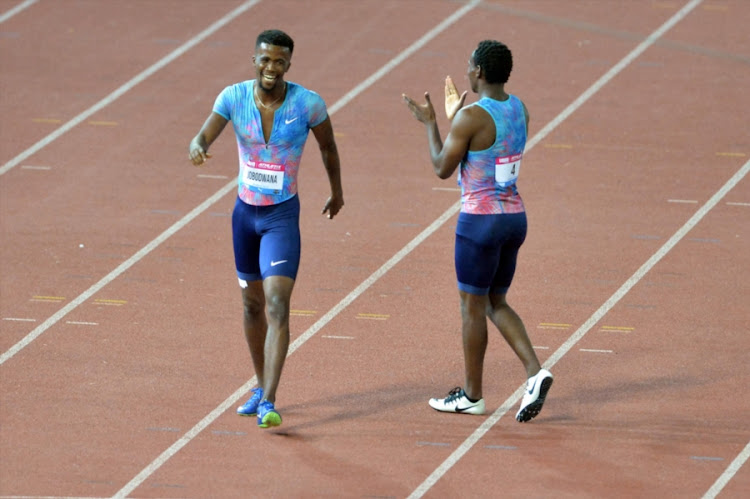 Anaso Jobodwana has a lot on his mind at the moment.

The athlete's thoughts are divided between preparing for the imminent arrival of his child and also plotting a way past Olympic champion and reigning 100m world champion Justin Gatlin when they meet in an eagerly anticipated 150m race in the Liquid Telecom Athletix Grand Prix at Tuks Stadium on Thursday.

While admitting to a strange feeling of stress and excitement at the same time‚ Jobodwana insisted that his preparations for his showdown with the US athlete have not been affected.

Jobodwana said his wife Taylor has gone into labour at a hospital in Phoenix‚ Arizona‚ in the US but he remains calm as she is with her family.

“It is unfortunate that I am not there with my wife and the family at this important time.

"But I am a little bit at ease because she is with her family who are supporting her all the way to make sure that everything goes fine‚" he said.

"I am in constant contact with them and I have been told that everything is going okay.”

Jobodwana‚ who is the former South African 200m record holder and 2015 World Championship 200m bronze medalist‚ will come face-to-face with Gatlin for the third time in his career on Thursday.

“Usually with people like Justin (Gatlin) or Usain (Bolt)‚ you have to stay within yourself in the first 30m because they get out of the blocks quicker‚" he said.

"I am going to try to keep as close as possible for the first 30m so that by the time I get to my running phase I can chip away.

“Some days you come on top and some days you don’t in terms of execution of plans and with Justin I have not come up on top yet.

"Thursday is another opportunity for me to try and beat him and hopefully the jet leg will get the better of him.”

Gatlin and Joboodwana will be competing in the 150m event for the first time on a competitive level and they will have Trentavis Friday and former South African 100m record holder Simon Magakwe to contend with.

“I like the 150m event because when you get to 100m you have a little bit more room to make up ground and that is something that I am looking forward to‚" said Jobodwana.

"I want to beat him (Gatlin) before he retires because he has about two more years before he hangs up his spikes.”

Gatlin said he has immense respect for South African sprinters and is expecting a tough battle against Jobodwana.

“It’s really great what is happening in South African sprints right now and I have massive respect for Wayde (van Niekerk)‚ Akani (Simbine) and Anaso (Jobodwana)‚" the American said.

"I know Anaso comes through strongly in the end.

"So I know it will be a tough race on Thursday‚ especially as he will be in front of his home crowd and I can expect him to put on a good show.”

Botswana star Isaac Makwala would like to become the fourth man in the world to break 31 seconds when he races the 300m in Pretoria on Thursday.
Sport
4 years ago

Anaso Jobodwana is back. The world championship 200m bronze medallist from 2015 was as dominant as he was cheeky as he stormed over the Ruimsig track ...
Sport
4 years ago

Botswana sprint star Isaac Makwala will be in action in the opening meet of the Athletix Grand Prix series at Ruimsig on Thursday.
Sport
4 years ago

Anaso Jobodwana wants to be the complete sprinter‚ but he’s not sure he will win the race to be at his American wife’s side for the birth of their ...
Sport
4 years ago