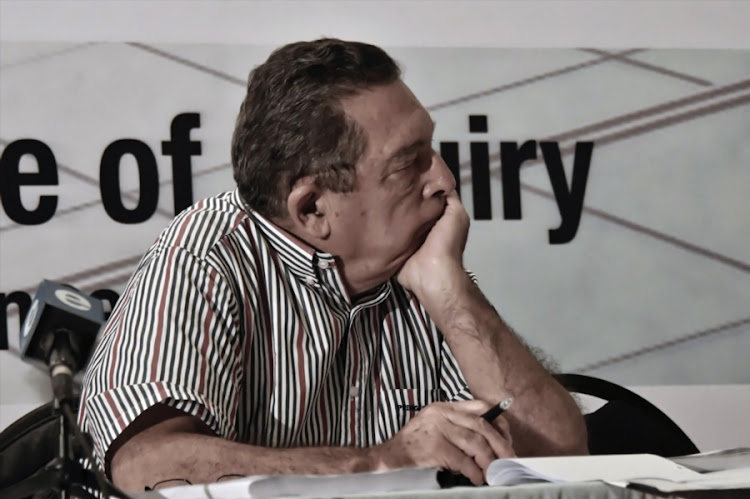 Dismissed Sascoc CEO Tubby Reddy acted in a way that was “tantamount to fraud”‚ a member of the ministerial committee of inquiry into SA Sports Confederation and Olympic Committee (Sascoc) governance matters said on Thursday.

Reddy and his two fired colleagues‚ CFO Vinesh Maharaj and manager Jean Kelly‚ made their submissions on Thursday‚ and while Reddy threw some bombs at president Gideon Sam‚ he came under fire himself.

Labour lawyer Shamima Gaibie‚ who sits on the committee with retired judge Ralph Zulman and veteran cricket administrator Dr Ali Bacher‚ was questioning Reddy on the so-called SS Griffin report that runs to about 300 pages.

Gaibie: “The rest of it was added by you and Ms Kelly.”

Gaibie: Then passed off as a report from SS Griffin.”

Reddy: “The SS report is contained within that. Those 24 odd pages we didn’t adjust or anything. We then supplement the information around the abuse of the constitution and one or two other things.”

Gaibie: “But what you did‚ what this says. Report prepared by Liam Evans‚ security specialists. Nowhere in this document does it say that you or Ms Kelly added to it.”

Reddy: “That is an error on my part. What is contained in there is the Griffin report as well … The other information is what was transpiring at Sascoc and I put that together so that I can bring it to the attention of the minister and out of that we’ve laid a charge with the police in relation to the bugging.”

Gaibie: “Did you provide this to the minister?”

Gaibie: “Did you tell him that you incorporated the majority of the information in this report?”

Reddy: “I just gave him the report.”

“Gaibie: “Well‚ Mr Reddy‚ that is tantamount to fraud.”

Reddy: “I just gave him the report.”

Gaibie: “You are saying to the minister here is the Griffin report.”

Reddy: “I hear you‚ that was not the intention. There was no fraud.”

Gaibie: “I’m saying to you this is tantamount to fraud.”

Reddy levelled several accusations against Sam‚ saying the president orchestrated their dismissals; double-dipped by claiming from Sascoc and the Commonwealth Games Federation‚ of which he’s the vice president; and he acted dictatorially and corruptly.

But Reddy came under fire for other acts as CEO.

Gaibie referred to a bill of costs drawn up by an attorney briefed by Athletics SA (ASA) that had been submitted to the committee by former Athletics SA (ASA) president James Evans as proof of Sascoc interference in his federation.

Itemized were a letter to Reddy‚ dated April 4‚ 2013‚ thanking him for instructions‚ “in a matter in which they were acting for ASA”; dated April 6‚ “drafting memo to Sascoc”; and‚ two dated April 9‚ one being “phone calls to Clifford [Cobers] and Tubby Reddy regarding ASA meeting on Sunday” and the other “phone calls to discuss Sascoc’s approach … and “possible placing of ASA in administration”.

Reddy said he didn’t recall discussions with an attorney.

“If this is correct‚ then this is unethical conduct‚” said Gaibie.

Reddy later explained that after Sascoc had placed ASA under administration‚ the attorney had worked with the administrator‚ Zola Majavu‚ and Sascoc.

“If they are so confident about the crimes that were committed‚ why are they so willing to drop charges.”

SA Sports Confederation and Olympic Committee (Sascoc) board member Les Williams says he met an investigator from a company that has been widely ...
Sport
4 years ago

SA Sports Confederation and Olympic Committee (Sascoc) board members have spent less than 10% of their time discussing sports issues in recent times‚ ...
Sport
4 years ago

The potentially explosive ministerial committee of inquiry into the FNB Stadium stampede last year has been postponed indefinitely.
Sport
4 years ago