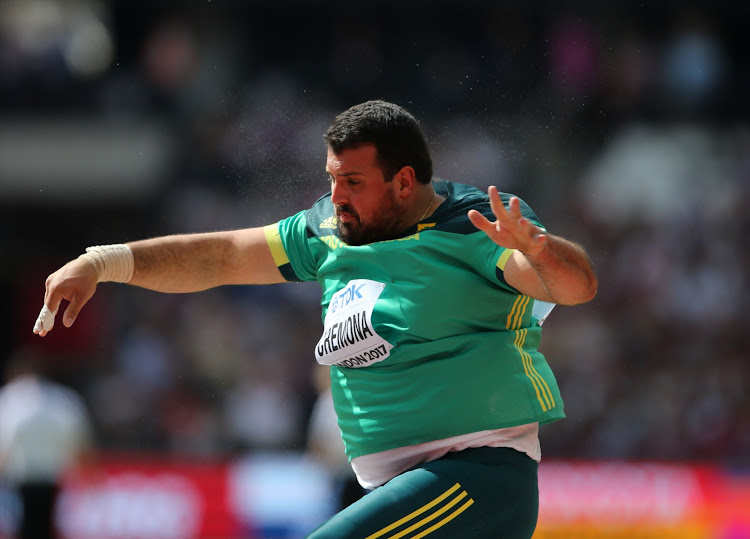 Orazio Cremona of South Africa in the qualification round of the mens shot put during day 2 of the 16th IAAF World Athletics Championships 2017 at The Stadium, Queen Elizabeth Olympic Park. File photo
Image: Roger Sedres/ImageSA/Gallo Images

Orazio Cremona picked up his seventh South African shot-put crown in the burning heat of the Pretoria sun on Friday as he achieved the fourth-best throw of his career.

Cremona’s 20.71m made him the runaway leader ahead of veteran Burger Lambrechts‚ second with 18.67.

But the drama he’s endured over his late inclusion — or is it omission — from the Commonwealth Games team going to Australia next month made his performance all the more sweeter.

“Last year was very special‚” he said‚ referring to when he threw three giant throws of 21.12‚ 20.98 and 20.80 when he was challenged by Jaco Engelbrecht‚ who’s injured this time.

“But this one‚ with all that’s been happening with me‚ this one’s quite special‚” added Cremona‚ who said he has done the medicals and much of the paperwork with the SA Sports Confederation and Olympic Committee (Sascoc) to secure his entry to Gold Coast.

He was initially omitted from the team‚ but his inclusion has yet to be confirmed by Sascoc.

Cremona said he felt he was lacking one good competition away from firing.

“I was throwing very well‚ I just couldn’t put it together‚ it was just that lack of competition actually.

“I think if I can throw one or two more (competitions) before Commonwealth Games then I’ll be fine‚” said Cremona‚ adding he’s confident of making the podium.

He insisted the saga around his Games participation had not dampened his motivation.

“There are things in life I was prepared for … and I knew I might have to take some shots. I always knew I would come out on top.”

He dedicated his triumph‚ in part‚ to his wife‚ who had sacrificed much.

“She hardly sees me. She’s always calm and collected‚ never fights with me when I come home late at night from training or leave early in the morning.”