The Masters is wide open‚ but Tiger lurks 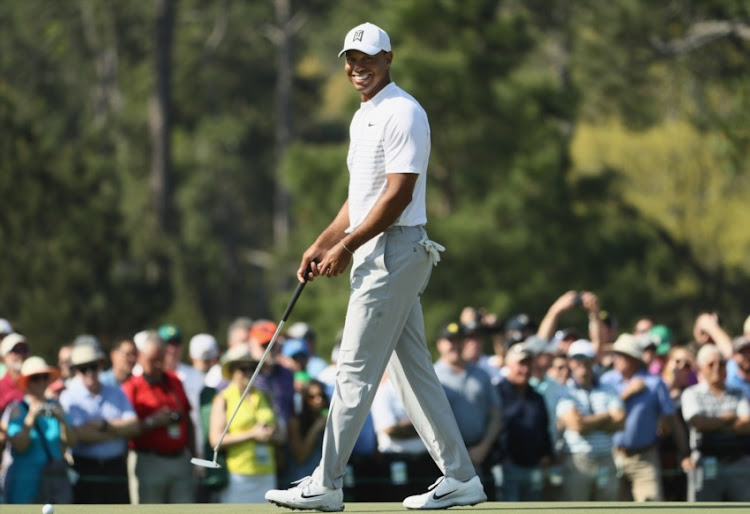 Tiger Woods of the United States reacts on the 17th hole during a practice round prior to the start of the 2018 Masters Tournament at Augusta National Golf Club on April 3, 2018 in Augusta, Georgia.
Image: Jamie Squire/Getty Images

Tiger Woods is the story of the 2018 Masters and whoever the winner is on Sunday night‚ if it’s not the great man himself‚ the champion would have had to overcome Augusta‚ the pressure and Tiger.

The season’s first major is also the most keenly awaited with Woods showing his best form in over five years while many of the usual contenders also appear to be peaking.

Although he won the last of his four Masters titles in 2005 and the last of his 14 majors at the US Open in 2008‚ Woods has not looked more in control of his game in years.

If he gets on a run at Augusta‚ the roars from the massive galleries will send shivers through the field.

But the fear Tiger once instilled in opponents has been diluted‚ and a generation of players have emerged without years of scarring inflicted by the greatest player of the modern era.

Jordan Spieth‚ the 2015 champion‚ was raised watching Woods dominate without suffering at Tiger’s ruthlessness. He doesn’t fear Tiger and has already claimed a green jacket to lift his own confidence.

Spieth was third in Houston last week and his game is tracking nicely. He has a win‚ two seconds and an 11th-placed finish in four Masters appearances. No one is better at Augusta.

Defending champion Sergio Garcia is striking the ball well and demonstrating good form as is Swede Henrik Stenson‚ who was in the mix in Houston last week.

Englishman Justin Rose‚ who lost last year’s play-off against Garcia‚ has been consistently good throughout 2018 and has two top fives in his last two tournaments. Northern Ireland’s Rory McIlroy is purring along nicely after winning the Arnold Palmer Invitational three weeks ago.

McIlroy is looking to complete the career Grand Slam at Augusta and the way he has been striking the ball and‚ more importantly‚ putting in the past month‚ are reasons to take his challenge seriously.

But Woods is regaining the aura he once had. His Sunday charges at the Valspar Championship and Arnold Palmer recently indicated that he is back after years of battling an ailing back.

At a course where he has won four times and had six top fives‚ including three runners-up finishes‚ a fit Woods is the name everyone expects to see in the mix on Sunday afternoon.

“I have four rounds to play‚ so let’s just kind of slow down‚” Woods told the gathered media on Tuesday.

“I’ve had anticipation like this before. If you remember the buildup was from the US PGA Championship of 2000 to the Masters of 2001‚ nine months of building up‚ what that tournament would mean.

“And it’s the same thing. I have got to go play and then let the chips fall where they may. Hopefully I end up on top but I have got a lot of work to do between now and then.

“I’ve played well over the years‚ I’ve won here a few times. But all those years that I’ve won‚ one part of my game has certainly stood out.

“Whether it’s driving the ball like I did in 1997 and putting it a couple years where I really putted well‚ or hitting my irons and hitting a lot of greens‚ but not only missing‚ missing in the correct spots every single time‚ there’s got to be a certain part of my game that’s got to be on‚ and hopefully this will be one of those weeks.

“I don’t think there’s one clear cut favourite. I think there are so many guys playing well at the same time. I think that’s what is making this year’s Masters so exciting.”

Oosthuizen is paired with Spieth and in-form Swede Alex Noren in the second-to-last group for the first round.