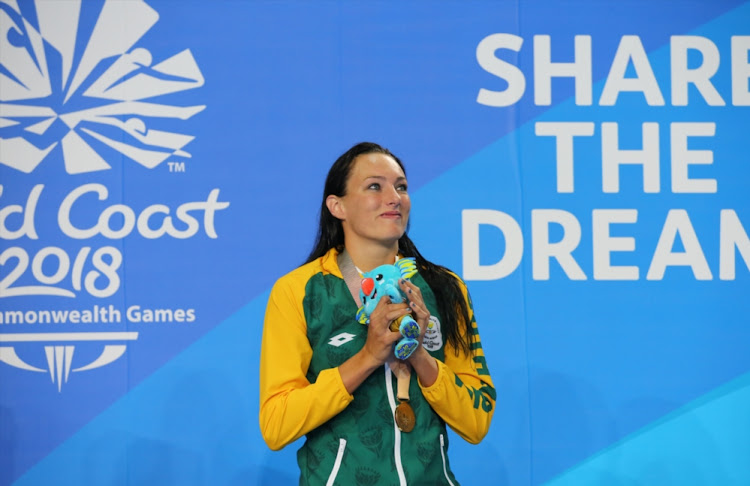 New breaststroke queen Tatjana Schoenmaker could help make it rain gold for Team South Africa on Monday as she bids for her second Commonwealth Games crown.

The 20-year-old Tuks student‚ the 200m champion‚ clocked 1min 06.65sec in the 100m breaststroke semifinals on Sunday night to take pole position in that race.

Schoenmaker will probably be one of SA’s two best golden bets on the day‚ Chad Le Clos being the other in the 100m butterfly (1.59pm SA time on Monday).

Dammit!” Chad Le Clos summed it up best after he had been edged into joint second place by young Scottish swimmer Duncan Scott in the 100m freestyle ...
Sport
4 years ago

The country — with four golds after the first four days of competition — has several other opportunities‚ although most are tough‚ if not close to impossible.

Akani Simbine and Henricho Bruintjies are in the 100m final where they will have to negotiate Jamaica’s Yohan Blake‚ Englishman Adam Gemili and Kemar Hyman of Cayman Islands (2.15pm SA time).

In lawn bowls‚ the women’s four‚ skipped by Elma Davis‚ will have a difficult time to inflict a first defeat on the Australian outfit‚ the reigning world champions (4.15am).

Cameron van der Burgh has a shot in the 50m breaststroke‚ where he is seeking his third consecutive Games crown (1.07pm).

But he will need a Herculean effort to upstage the seemingly unbeatable Englishman Adam Peaty. “I’m feeling confident‚” Van der Burgh said after winning his semifinal in 26.95sec‚ second to Peaty’s 26.49 Games record.

“The most important thing is to come out and give your best performance. That’s all you can do‚” added the veteran‚ who will have two other SA swimmers in his race‚ Cape Town matric pupil Michael Houlie and Brad Tandy.

Schoenmaker was happy with her time‚ but refused to be drawn on golden ambitions in the final (1.12pm).

Schoenmaker is not far off Penny Heyns’s last remaining African record‚ the 1:06.52 she set at the height of her powers in Australia in 1999.

“I want to try go for it‚ but if it doesn’t come‚ that’s also okay‚” said Schoenmaker‚ who could be the first local female to bag a breaststroke double at a championship since Heyns at the 1996 Olympics.

She pointed out she hadn’t felt this good in competition for a while. “I think it just all came together.”

Le Clos picked up one of SA’s two medals of the day on Sunday when he finished joint second in a pulsating 100m freestyle contest.

Bowler Colleen Piketh took the other‚ a bronze in the women’s singles‚ the same medal she won last time around at Glasgow 2014.

This was the first day of the Games that Team SA failed to land a gold‚ and it showed on the medals table as they slipped from fifth overnight to seventh‚ below the same six nations that were above them after Glasgow 2014 — Australia‚ England‚ Canada‚ India‚ Scotland and New Zealand.