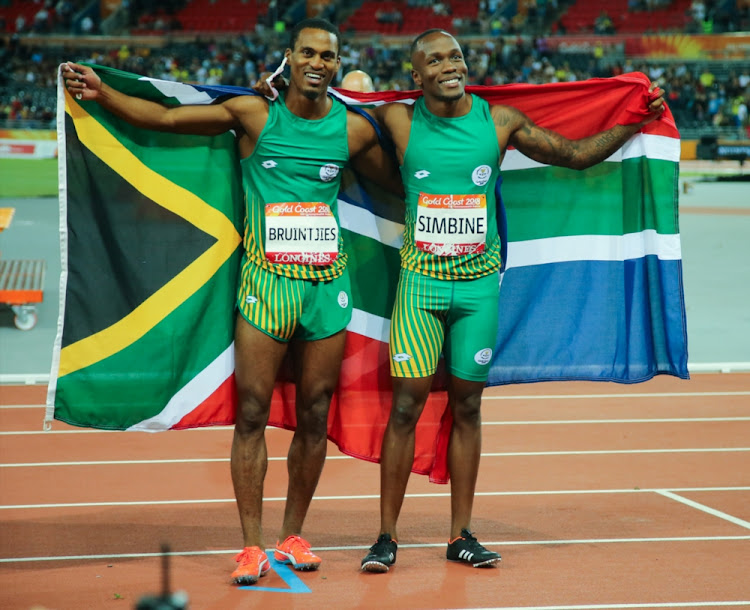 Henricho Bruintjies and Akani Simbine of South Africa hold up the national flag after finishing first and second in the men's 100m final during the evening session of the athletics at the Carrara Stadium on day 5 of the Gold Coast 2018 Commonwealth Games.
Image: Roger Sedres/Gallo Images

South African lightning struck Gold Coast several times on an incredible Monday night‚ with Akani Simbine delivering the last of the blows as he won the 100m crown.

Four golds‚ four silvers and a bronze — eight of them coming from speedsters on the track and in the pool — lifted SA to fifth on the Commonwealth medals table.

Simbine finally bagged the first major medal of his career as raced to victory in the 100m at the Carrara stadium with Henricho Bruintjies taking silver behind him to leave Jamaica’s former world champion‚ Yohan Blake‚ battling for bronze.

Simbine admitted afterwards it was a monkey off his back.

Simbine said he couldn’t remember anything before the 60m mark.

Martin Binedell sneaked the favourite’s tag in the Commonwealth Games 200m backstroke on Monday when he clocked the fastest time of the morning heats.
Sport
4 years ago

“Yohan‚ I thought he was going to kick‚ but he didn’t. And then I just saw myself and I literally just went ‘okay‚ I just won this race’‚ and I put my hand up.”

Bruintjies‚ in the lane outside Simbine‚ said his game plan was to pursue his compatriot.

“So literally my whole race was Akani‚ Akani. I was just chasing him because I knew if I chase him‚ I’m going to be on the podium.”

They’ll next be in action in the 4x100m relay later in the week. “I want to take home two golds‚” Simbine said with a smile.

SA’s swimmers delivered three golds‚ and the most sensational of them being Cameron van der Burgh’s unexpected triumph in the 50m breaststroke.

Dammit!” Chad Le Clos summed it up best after he had been edged into joint second place by young Scottish swimmer Duncan Scott in the 100m freestyle ...
Sport
4 years ago

Peaty hadn’t been beaten since Van der Burgh edged him by 0.02sec at the previous Commonwealth showpiece in Glasgow.

Since then the South African has had to play second fiddle to him at two world championships and the 2016 Olympics‚ but on Monday the old warhorse reclaimed his old turf as he touched first in 26.58.

Le Clos‚ who won his third gold medal of Gold Coast in the 100m butterfly‚ had become only the second man in history — the first since 1974 — to win three Games titles in the same event in the 200m butterfly.

Now Van der Burgh‚ who turns 30 next month‚ has added his name to that list.

“To be able to come through the years and be able to finish on such a high is really special. Adam and I had a really tough rivalry.

“He obviously had the upper hand the last couple of years so to get on top of the podium and see my flag up there and my national anthem being played is going to be‚ when I look back on my career‚ one of the highlights.”

New breaststroke queen Tatjana Schoenmaker could help make it rain gold for Team South Africa on Monday as she bids for her second Commonwealth Games ...
Sport
4 years ago

The usually reserved 20-year-old was emotional.

And Le Clos took his 16th career Games medal by winning the 100m ’fly in a 50.65 championship record.

That podium finish brought him level with Australian Susie O’Neill as the most decorated Games swimmer of all time‚ only two short of the all-time record of 18‚ shared by two shooters.

The women’s four lawn bowlers battled bravely but had to settle for silver after losing in the final to world champions Australia.

And Caster Semenya will lead SA’s charge for gold on Tuesday as she competes in a 1500m final (2.04pm) missing the type of firepower she had faced at the world championships last year.

She was the fastest of the semifinals on Monday.

“The main thing was to take command of the race‚ see how we can run the splits. I was happy with the splits.”