Ntutu and Langenhoven give SA another 100m gold-silver triumph 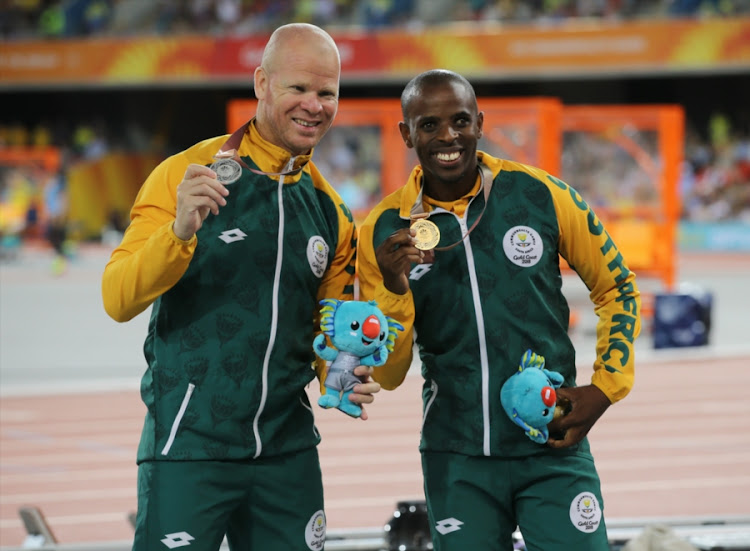 Hilton Langenhoven and Ndodomzi Jonathan Ntutu of South Africa with their medals for the mens T12 100m during the evening session of athletics on day 8 of the Commonwealth Games at the Carrara Stadium on April 12, 2018 in Gold Coast, Australia.
Image: Roger Sedres/Gallo Images

The pair‚ inspired by the one-two achieved here by Akani Simbine and Henricho Bruintjies a few days back‚ capped another lucrative day of six Commonwealth Games medals for Team SA‚ who ended the day in fourth spot with 11 gold.

Wrestler Hanru Botha and mountain-biker Alan Hatherly put their codes on the scoreboard with silver and bronze respectively.

The disabled lawn bowls triple claimed a bronze‚ the fourth medal for their sport‚ while 400m hurdler Wenda Nel finished third to deliver the 12th medal by track and field.

But hopes that SA could dominate the 200m as they had the 100m were dashed.

First the appeal to overturn Anaso Jobodwana’s disqualification came to nought‚ and then Clarence Munyai was unable to break into the top three‚ finishing fourth despite struggling with a hamstring niggle he suffered in the semifinals.

He spoke about taking two weeks off‚ which means he’s surely out of the 4x100m relay team that competes in the heats on Friday morning.

Instead it was Ntutu and Langenhoven who enjoyed the limelight on the night.

“It was awesome‚” said Ntutu‚ who took the title in 11.02‚ slower than the 10.80 Games record he had clocked in the morning heats.

“It wasn’t the same as this morning in terms of getting out of the blocks and driving phase‚ but what I did do was try and stay calm‚ not try to emulate what I’ve done this morning.

“But winning a gold medal — ahh — nothing can describe the feeling that I’m feeling at the moment. I’m sure it will hit me harder when I get home later‚” said Ntutu‚ who was born with his disability.

Langenhoven‚ who clocked 11.27 to take second by one-hundredth of a second over the Malaysian competitor‚ said the feat by Simbine and Bruintjies had motivated them even further.

“When you see your countrymen achieve special moments on the track‚ it always inspires you‚ it always gives you goosebumps and you want to emulate.

“Me and Jonathan knew that we will be in the medals‚ the order was unclear‚ but I will take my silver any time‚” said Langenhoven.

Team SA needs another five golds to equal their all-time best of 16 from Vancouver 1954.

Colleen Piketh and Nicolene Neal will take on Malaysia for the women’s pair gold on Friday morning‚ and Caster Semenya is the favourite in the 800m final in the evening.

But Piketh‚ who took the pairs gold at Glasgow 2014‚ and Neal nearly didn’t even get to the semifinals after producing a sensational fight-back in the quarterfinals against England.

They were trailing 6-11 with four ends to go and Piketh delivered some sensational drives to smash the game away from their opponents and put the pair into a 14-11 lead with one stanza remaining.

“Her drives were brilliant‚” Neal said of the skip.

“And that’s what won the game.”

Against Scotland in the semifinal they took control earlier.

Hatherly‚ who broke his arm in a race in February‚ took bronze to spoil what would have otherwise been an all-New Zealand party on the podium.

“To come back to a race of this level and medal is huge‚” said the 22-year-old.

“I was racing against the best in the world. Super tough course‚ happy to have been here two weeks back to adjust to the humidity here.”

Botha qualified pretty easily for the 74kg final‚ but he had the misfortune of facing Indian star Kumar Sushil‚ the defending champion who has won a world title and two Olympic medals.

The bout was almost over before one could blink.

The only chance cauliflower-eared Botha — who recently had his first professional boxing fight — might have had was if he’d caught his opponent with an uppercut on the way in.

It rained early medals for South Africa at the Commonwealth Games on Thursday‚ with wrestling‚ mountain biking and lawn bowls contributing four gongs.
Sport
3 years ago

A BBC reporter left England's Commonwealth Games swimmers in hysterics when he fell into a swimming pool during a live interview.
News
3 years ago

Organisers have urged athletes in Australia for the Commonwealth Games to respect the terms of their entry visas after Cameroon reported that a third ...
Sport
3 years ago

Sunette Viljoen won the fourth Commonwealth Games medal of her career on Wednesday‚ merely weeks after a debilitating back injury that had prevented ...
Sport
3 years ago