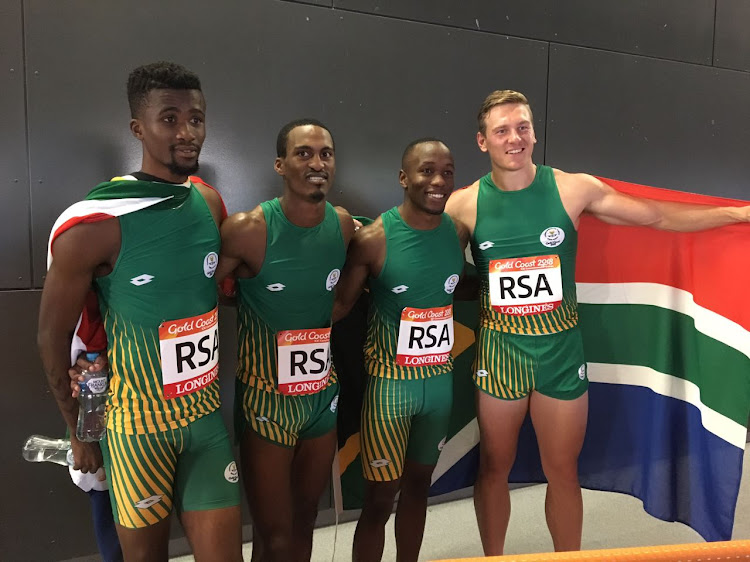 Akani Simbine once again unleashed a display of awesome power as he anchored South Africa to the 4x100m relay silver medal in Gold Coast on Saturday.

And Clint Hendricks bagged a second medal for SA on the day‚ taking bronze in the men’s road where he snatched third spot in a sprint for the line.

Team SA were still clinging to fifth spot on the medals table with 13 gold‚ 11 silver and 13 bronze‚ just one gold ahead of New Zealand. The country’s most realistic chance of a final Commonwealth Games gold is the Blitz Boks in the rugby sevens which concludes on Sunday.

The 35.24sec national record the class of 2018 clocked was more than half-a-second quicker than the 38.98 Lee-Roy Newton‚ Leigh Julius‚ Snyman Prinsloo and Sherwin Vries ran for silver 12 years ago.

Simbine was in fourth position when he took the baton from Anaso Jobodwana‚ trailing England’s Harry Aikines-Aryeetey‚ Yohan Blake of Jamaica and Australian Josh Clarke.

He hit the turbo and overhauled two of them‚ but just didn’t have enough time to catch the Englishman.

Simbine ran the anchor leg when SA set the last national record‚ 38.35‚ at the previous Games in Glasgow‚ delivering the fastest final leg after Usain Bolt.

Ntutu and Langenhoven give SA another 100m gold-silver triumph

South Africa claimed another sprint double as visually impaired stars Johnny Ntutu and Hilton Langenhoven claimed the 100m gold and silver at the ...
Sport
3 years ago

South African lightning struck Gold Coast several times on an incredible Monday night‚ with Akani Simbine delivering the last of the blows as he won ...
Sport
3 years ago

Akani Simbine defied a deafening Australian crowd at the Carrara stadium on Friday morning as he hunted down their yellow-clad runner to win the ...
Sport
3 years ago