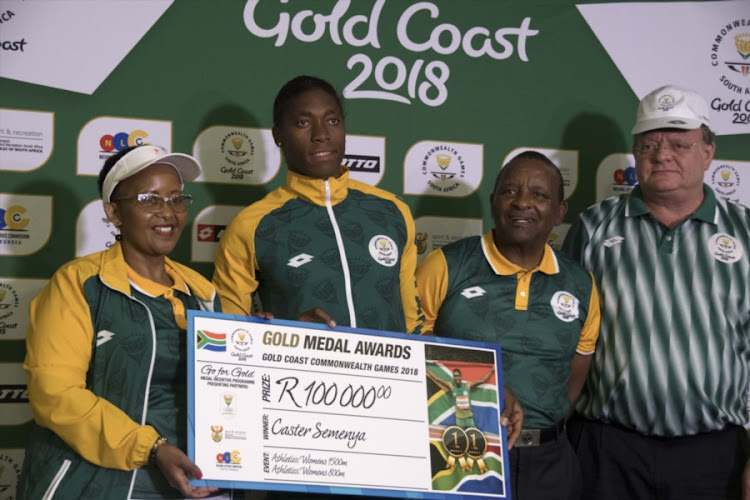 South African Sports Confederation and Olympic Committee (Sascoc) president Gideon Sam has confirmed that the process to challenge the International Association of Athletics Federations (IAAF) in defence of Caster Semenya has begun.

Legal experts‚ high-ranking officials from the Department of Sport and Recreation‚ and members of the Sascoc's medical commission‚ made up of among others a sports physician and scientist‚ led by Dr Phatho Zondi met in Cape Town on Wednesday morning to discuss the way forward.

“The process is simple‚ as we speak now‚ there is a meeting taking place in Cape Town today (Wednesday) between Sport Recreation South Africa‚ Sascoc medical commission and a group of lawyers looking into this matter‚” said Sam on Wednesday where Sascoc thanked the National Lotteries Commission (NLC) for their support in Pretoria.

“All those people are sitting around the table so that we have one voice coming out of this process going forward.

"We need to have a clear plan of how we are going to approach the IAAF and we want all related parties to engage.

“We are getting our ducks in the row and after Wednesday's meeting‚ they will then come forward and advice Athletics South Africa (ASA) and Sascoc on what we need to do to move to the second phase of the process.

"After this meeting they are having in Cape Town‚ we will be briefed and information sharing will take place among all the role players and then we will approach the IAAF.

"I am not sure when we will be going to the IAAF but ultimately we will approach them.”

The IAAF recently introduced new rules that prevent women who naturally produce high levels of testosterone from participating in middle distance races unless they agree to take medication to reduce those levels..

Sam also said that South Africa would target at least 15 medals at the 2020 Summer Olympics in Beijing.

“Let us put the target there and whether we get there or not it should not be a joke for the public but it must be country saying it is doable‚" Sam said.

"If we fall short‚ that will be that but if we make it then we are in.

"We are targeting three medals each in the top sports like athletics‚ swimming and rowing and we will try to get the other six from the other sports.”

Newly crowned Commonwealth Games 800m and 1500m champion Caster Semenya will kick off her Diamond League campaign in the longer event in Doha on ...
Sport
3 years ago

'God made me the way I am': Caster Semenya fires back at IAAF gender rules

Caster Semenya has fired back at her critics after new regulations were released that compel women athletes with high levels of naturally occurring ...
Sport
3 years ago