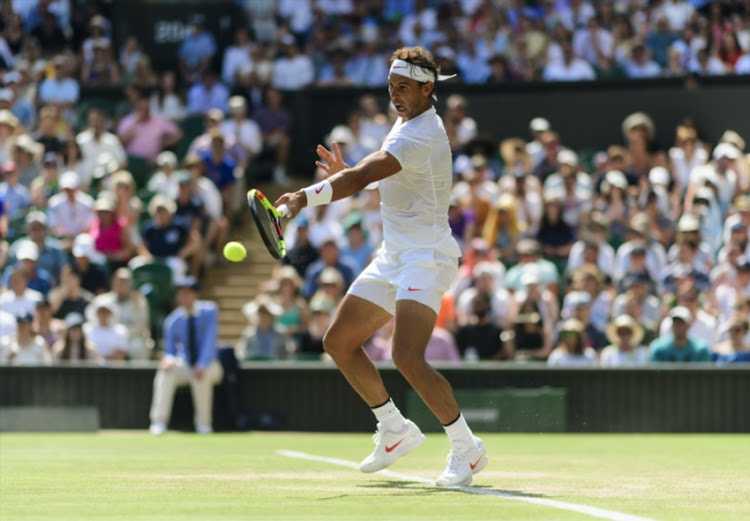 Rafael Nadal of Spain in action against Alex De Minaur in the third round of the gentleman's singles at the All England Lawn Tennis and Croquet Club on July 7, 2018 in London, England.
Image: TPN/Getty Images

Never mind the tennis, there was only one thing Rafael Nadal cared about after he completed a hat-trick of straight-set wins to reach the fourth round of Wimbledon on Saturday.

“I’ll go and watch some football. What’s going on? — England, it’s coming home or not?” asked the sweat-drenched Spaniard with a grin moments after handing baby-faced Australian Alex de Minaur a 6-1 6-2 6-4 roasting.

The Alicante-based 19-year-old played his part in an entertaining duel as he chased after everything Nadal could throw at him — and in turn kept the Spaniard on Centre Court longer than he would have liked.

But the world number one, chasing a third title at the All England Club, stuck to his own game plan to ensure he reached the second week of the grasscourt major without dropping a set.

Nadal has endured his fair share of losing to young upstarts at Wimbledon, having lost to players ranked 100 or lower in four of his five previous appearances, but there was no danger of that happening on Saturday.

His main target appeared to be getting off court before the 3pm local time kickoff of England’s World Cup quarter-final showdown with Sweden.

De Minaur made him play 26-minutes of extra time but the final result was never in doubt and a lunging volley winner sealed the win — and prompted a mass exodus from Centre Court as fans rushed to watch the football on their phones and tablets elsewhere in the grounds. England won 2-0.

“(I have played) three matches, ever match has been more and more postive. I’m looking forward to keep playing well.”

The 17-times Grand Slam champion won the opening set in 33 minutes, and it would have been much quicker had he not needed five break points in a 12-minute fourth game to break the Wimbledon debutant for a 3-1 lead.

Nadal was at his brutal best in the second set as he did not drop any points on serve until the final game.

There he chased down a De Minaur lob to the baseline and with his back to the net, swiped the ball between his legs to lob the Australian.

But the teenager tracked the ball as it sailed over his head, made a u-turn as he, too, dashed to the baseline to repeat the between-the-legs shot — only to see his effort get tangled at the bottom of the net.

The trickshot exchange gave De Minaur reason to believe he could trouble Nadal and so it proved to be as he earned two break points just moments later — only to see both disappear and Nadal seal a two-set lead thanks to a backhand error from the Australian.

Whereas Nadal had trouble reading Mikhail Kukushkin’s formidable forehand just two days ago, on Saturday he was seeing the ball like a football and rattled off 30 winners, including eight volleys.

The Spaniard will next play Jiri Vesely from the Czech Republic as he bids to reach the Wimbledon quarter-finals for the first time since finishing runner-up to Novak Djokovic in 2011.