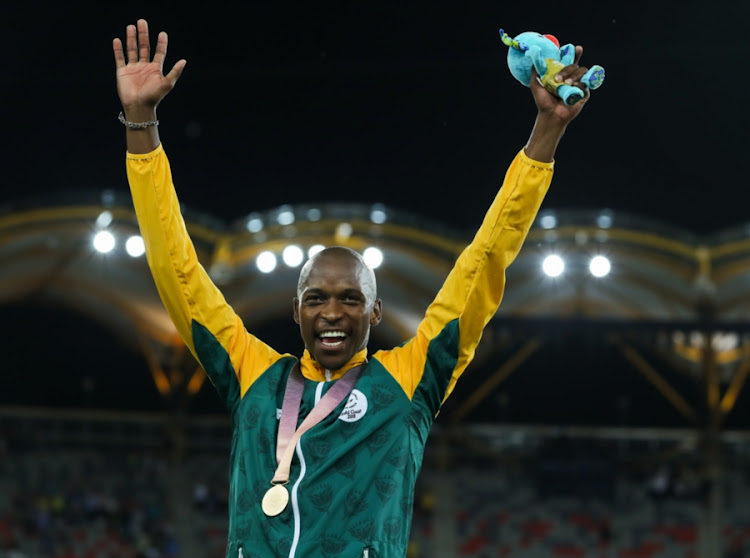 Luvo Manyonga of South Africa with his gold medal in the men's long jump during the athletics evening session on day 7 of the Gold Coast 2018 Commonwealth Games at the Carrara Stadium on April 11, 2018 in Gold Coast, Australia.
Image: Roger Sedres

Long-jumper Luvo Manyonga has been nominated for the IAAF Male World Athlete of the Year award‚ to be announced in Monaco on December 4.

Manyonga is one of 10 nominees who include Kenya’s Eliud Kipchoge‚ owner of the 2hr 01min 39sec marathon world best‚ American sprinter Noah Lyles‚ unbeaten in the 200m this season‚ world-record holder decathlete Kevin Mayer of France and Qatar’s 400m hurdler Abderrahman Samba‚ who posted the world’s fastest time since 1992.

Manyonga won the Diamond League race‚ but he was unable to repeat his invincible status of 2017 this year‚ getting beaten a few times by Cuba’s Juan Miguel Echevarría as well as losing to countryman Ruswahl Samaai at the African championships.

The list will be trimmed to five next month after a ballot where the public can vote on the IAAF’s social media platforms.

The remaining nominees are:

World 800 metre and Olympic champion Caster Semenya features prominently on the list of nominees for the South African Sports Awards that were ...
Sport
3 years ago

Caster Semenya will have a tough time in the women’s 400m at the IAAF Continental Cup competition in Ostrava‚ Czech Republic‚ on Saturday‚ going up ...
Sport
3 years ago