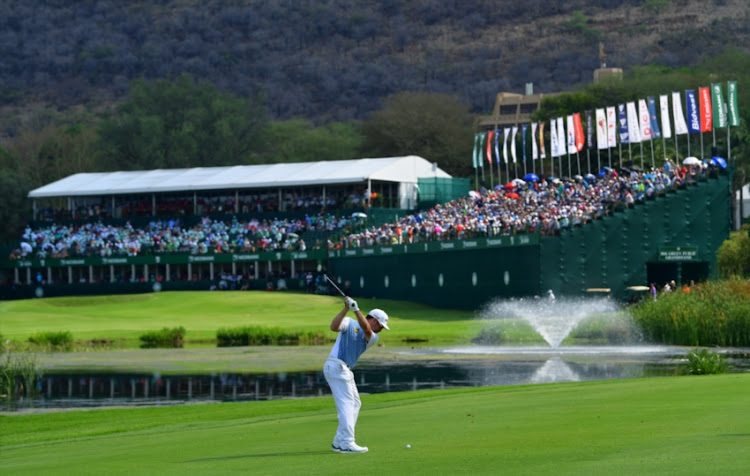 Louis Oosthuizen of South Africa plays a shot on the 18th hole during the third round of the Nedbank Golf Challenge at Gary Player CC on November 10, 2018 in Sun City, South Africa.
Image: Stuart Franklin/Getty Images

A two-shot swing on the 18th on Saturday has emboldened Louis Oosthuizen ahead of the final round of the Nedbank Golf Challenge on Sunday.

Oosthuizen’s prospects appeared to be going south as tournament leader Sergio Garcia firmed his grip on the tournament, but the Spaniard made an uncharacteristic error as the shadows lengthened at the Gary Player Country Club.

He deposited his approach to the 18th in one of the stands next to the green but that carries a non punitive free drop.

He however overcooked his pitch to the flag and missed his return putt for par before Oosthuizen drew an approving roar from the packed stands when he sank a birdie putt after a pin point approach.

It also got his juices flowing.

“It was a big thing for me given the way I had been playing,” a relieved Oosthuizen said. “A two-shot swing is always great on the last going into the final round. Two shots and not four is a helluva lot closer to the lead. Mentally for me it was a big putt,” said Oosthuizen.

Garcia says he is not too bothered by who’s chasing, even if it is a popular South African who is yet to win this event.

Garcia’s PR with the local crowd carries the added complication that he has broken South African hearts twice before.

“Obviously I focus on my game and I know if I play well it is going to be tough for them to catch me,” said Garcia who won his home event at Valderamma earlier this year.

“You never know. You don’t know if someone will go out and shoot a 66 or 65. Then it means you have to shoot under-70 which is always good on this golf course.”

With Garcia setting the pace at 10-under Oosthuizen knows he can only reel the Spaniard in if he “dials in” his iron play and find rhythm in his swing early on Sunday.

On Saturday his iron play required recalibration as he struggled to find consistency and admitted to it being “a tough day.” He had to adopt a measured approach and aim for the middle of the green.

“From the get-go I couldn’t do anything good,” sighed Oosthuizen. “I realised pretty quickly it was a day I should not play myself out of the tournament completely. Just hang on and take pars. Just get off the course.”

His approach to the final round will be uncomplicated. “You see where you are after nine holes and then decide whether you should push a bit more,” said Oosthuizen.

A four-under 68 helped propel Thomas Detry back in contention with the Belgium proving particularly sharp on the back nine. He bogyed the 10th but four birdies in the last five holes has given him hope.

He is on seven-under, along with Finland’s Mikko Korhonen and former champion Lee Westwood who had to settle for a 69.

Another Englishman Ross Fisher carded an impressive 67 to be five shots off the lead, while South Africa’s Darren Fichardt is on four-under.

Pre tournament favourite Rory McIlroy has flown under the radar. Bogeys on the first two holes on Saturday meant he was on the back foot from the start and by the time he dropped another shot on the seventh his prospects of shooting a sub par round had all but vanished.

He did pick up shots on the par-five, ninth and 14th and looked on course for another with a marvelously judged approach on the 18th. He is 10 shots off the lead and will need a miracle to get back in contention.