Ernie Els and his rookie nephew spur each other on 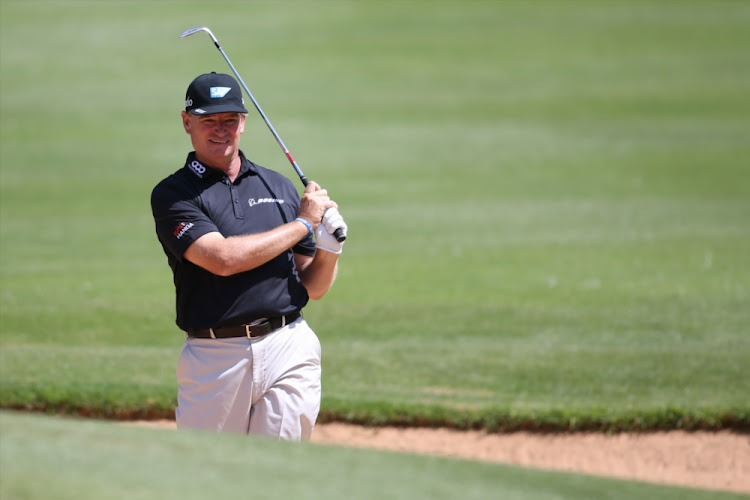 Ernie Els and his rookie nephew Jovan Rebula were all smiles after playing together in the third round of the SA Open.

Els‚ a five-time SA Open champion played with his nephew‚ who is the leading amateur with one round to go and it was clear the pair enjoyed each other’s company.

They even captured the moment.

“We took some pictures on the first tee from our cell phones to get it on record.

"Really special and I think as time goes on‚ we will reflect on this day‚ I know I will know that this is pretty special.

"He is a youngster so it might not settle in yet with him but knowing the kid since he was in nappies and now playing the South African Open is special."

“This must be one of the quickest rounds of golf I’ve ever played‚” Rebula sighed.

“I wished it could have carried on the whole day.

"For me‚ it was a dream to be able to play with my uncle one day. It doesn’t matter where it is but especially the South African Open.

We catch up with golfer Branden Grace

The Pretoria-born golfer talks about the folly of the world rankings, how he wants his son to carry his bag at Augusta next year and how fatherhood ...
Sport
3 years ago

Load shedding cut the joy off the course at the SA Open in Randburg, north of Johannesburg, on Saturday, while on it a blustering north-easterly led ...
Sport
3 years ago

"It’s an honour and I really enjoyed it out there. We had such a fun time‚” Rebula beamed.

What made their round even more special was the fact that they both seemed to cope with the tricky conditions.

Despite the testing wind Els and Rebula carded very respectable scores of 68 and 70.

“I feel we spurred each other on‚” noted Els.

“I mean‚ I birdied the first and Jovan birdied the second and the third. I got the fourth and he got the fifth. I mean‚ we birdied a lot of holes.

"It would have been a great best ball‚ I can promise you that. It must have probably been a 62 in best ball. It was great to see my sister out there‚ Dragan caddying for Jovan. As parents‚ they must be so proud‚ and as an uncle‚ I’m just as proud.

“We played well. Absolutely. Obviously‚ I had a very frustrating finish at the end there. Jovan finished very well but we made quite a few birdies‚ you know.

"We birdied every other hole‚ between the two of us‚ on the front nine and quite a few on the back. It was a tough day but I felt Jovan really kept it together. He’s playing for the Freddie Tait trophy and I’m trying to win the open again. It was a big day but we enjoyed it."

After the third round Rebula is on five-under was two shots clear of Deon Germishuys as the leading amateur.

Naturally he wants to emulate his uncle.

“I’m fully aware that his name (Els) is on that trophy. It’s been a goal of mine to be able to just make the cut‚ first of all‚ at the South African Open.

"To tick that box off‚ first of all‚ is great and now we’re playing for the real deal‚ so I’m really looking forward to the final round‚” said Rebula.

Els’s chest puffed out with pride.

“It really is a proud moment for me as an uncle‚" he said.

"As I said‚ we will reflect on this. I was hoping he’d be a good golfer when he was growing up and he really showed signs. And then‚ you’re like ‘I hope he’s really good’‚ because it’s such a disappointment for some kids when they’re not good enough and they want to be pro.

"But‚ I’m happy he’s good enough. I hope he breaks every record I have. I only have love for Jovan and I just wish him all the best‚” said Els.

“Obviously‚ my uncle is one of my role models and it’s not necessarily just on the golf course‚ I mean he’s just such a special person‚” noted Rebula.

“He’s always caring for other people around him and that’s what I look up to more than the golf itself.

"But‚ obviously‚ with my uncle’s records‚ it’s something really special and I would probably have to work really hard to achieve what he has.”