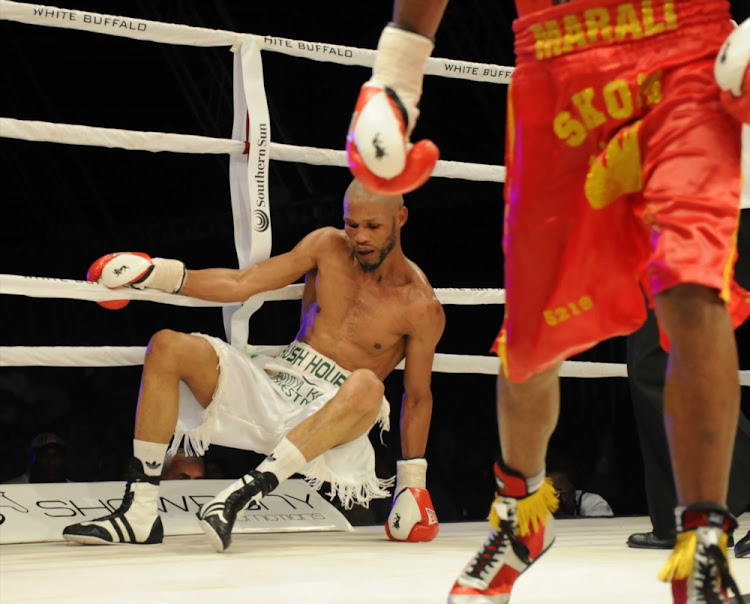 A file photo of Ali Funeka going down during a fight. The Eastern Cape-born boxer has lost his previous five fights in a row and the writer is of a strong view that he should hang up his gloves.
Image: Lee Warren / Gallo Images

Boxer Ali "Rush Hour" Funeka has no business being in the ring and should have quit the sport a long time ago.

This assessment of the Eastern Cape boxer's career might sound a tad harsh to some but we will offer an explanation for this tough stance.

The fact is the 40 year-old boxer's best days are behind him and he risks putting his life on the line each time he steps into the ring.

Our argument that he should turn his back on the sport stems from the fact that he has now suffered five consecutive losses and three of those defeats were against boxers who would not have dared to maintain eye contact with him in his prime‚ let alone step into a ring to face him.

Funeka‚ like many other boxers around the world‚ has had a difficult time acknowledging the fact that his skills have deteriorated and it is time to call time on his career.

Are members of the man's management and those close to him oblivious to this reality?

It seems these warnings have largely fallen on deaf ears from where we are sitting as Funeka will be part of a tournament to be staged by Ayanda Matiti of Xaba Promotions and Events at East London's Orient Theatre on March 3.

Granted‚ boxing is all about risks and boxers face these hazards from the moment they sign their contracts to the day of the actual fights.

In fact‚ things are no easier even in the amateur ranks as greenhorns are subjected to serious poundings in the gym long before their ascent to the professional circuit.

If a boxer ducks more than he takes blows‚ then fine.

But the former SA junior lightweight‚ WBC International lightweight‚ WBF junior welterweight‚ IBO‚ WBO Africa welterweight titlist can no longer evade punches as skillfully as he used to in his heydays and his jaw has been reduced to glass.

Funeka has been a professional boxer for 23 years and has boxed 295 rounds competitively in 52 boxing matches with 39 wins (31 knockouts) against 10 losses and three draws.

Surely his family‚ friends‚ admirers and promoters know that he should have hung up his boxing gloves a long time ago?

Think back to Funeka's perilous state against Tsiko Mulovhedzi when he was blown away inside the scheduled 12 rounds in 2015.

The man was hospitalized after that bout and shockingly‚ he claimed that Mulovhedzi from Limpopo had used muthi.

The bottom line is the long-term effects of injuries in the ring can be devastating and things become decidedly trickier when a boxer overstays his welcome.

Staying too long and missing the early signals to walk away can have devastating consequences and there are numerous examples of boxers who didn't react to that warning bell fast enough.

James "Lights Out" Toney - the American who held multiple world titles in three weight classes - is a case in point.

He is a shadow of his former self these days and his speech is so slurred that he's unintelligible.

Funeka's name will definitely be mentioned when the boxing history books are written and there really is no need for him to continue to linger on.

Walk away Funeka‚ you've already made your mark and continuing to loiter around is not worth it.