When Jeff Magagane lost the bad attitude‚ he lost weight 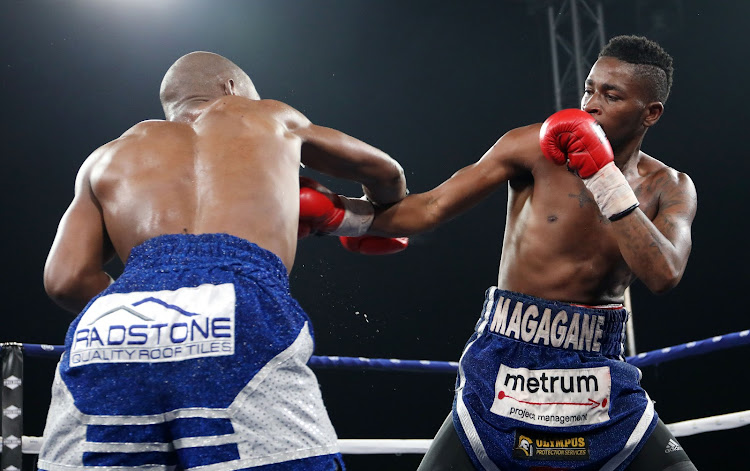 Boxer Jeff Magagane (R) in action during a fight against Kutlwano Ogaketse (L) for the International Super FeatherWeight Contest at the 2018 Fox Africa Boxing 7 at the Sibaya Casino in Durban.
Image: Muzi Ntombela/BackpagePix

The former three-times SA amateur lightweight champion has dropped two divisions to take on Tello Dithebe for the WBA’s vacant Pan Africa featherweight title at the Carousel on Friday night.

The belt was recently vacated by his former stablemate Rofhiwa “War Child” Maemu‚ who is stepping up to challenge for the IBO world junior-lightweight title next month after making a clean break with the gym.

It’s not unusual for fighters to move up in weight‚ but Magagane is going in the opposite direction‚ a move most famously associated with "Baby" Jake Matlala and more recently Hekkie Budler and Ryno Liebenberg.

Boxing politics make an unwelcome entrance into the ring

Boxing politics paid an unwelcome visit to the Johannesburg press conference to announce the Feast in the East tournament on March 10.
Sport
2 years ago

And the reason is linked to the fact that‚ for someone with his amateur pedigree‚ Magagane’s professional career hasn’t quite gone to script with a record of 10 wins and three losses since his debut in late 2015.

“I was big-headed and I didn’t want to listen to anyone‚” Magagane told TimesLIVE at trainer Alan Toweel’s gym in Linden.

“Now my discipline is good‚ I’m back on track. Ja.”

Soweto-bred Magagane‚ who lost his first shot at a WBA Pan Africa title at lightweight in 2017‚ has a collection of tattoos‚ and he is planning to get another one after the fight‚ this time to add the name of his son Okhethwa‚ who will turn six months on the day of the fight.

Thulani 'Sugar Boy' Malinga will not go down without a fight

Thulani "Sugar Boy" Malinga had the world at his feet after he beat Nigel Benn to win the WBC super-middleweight champion in March 1996 and financial ...
Sport
2 years ago

Daughter Zwanga‚ 6‚ is already there‚ along with a rosary and the quote “Let it go”‚ in memory of his father who died in 2014.

Dithebe has lost his last three fights on the trot‚ including a points defeat to Maemu in 2018.

Also on the bill is Magagane’s stablemate‚ novice heavyweight Wilhelm Nebe‚ who will engage in his second paid bout.