Kevin 'Two Guns' Lerena lives up to his own hype 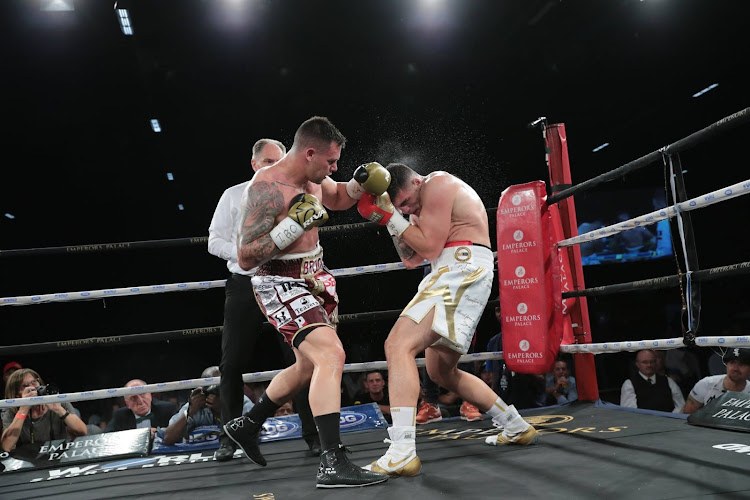 Boxers often make extravagant promises as soon as they come within 100 meters of a microphone but many of them fail to live up to their own hype after they’ve stepped into the ring.

The cynics must have snickered uncontrollably when IBO cruiserweight champion Kevin “Two Guns” Lerena predicted ahead of his fight against Artur "Thunderman" Mann that he would stop the challenger via knockout when the two boxers met at Emperors Palace on Saturday night.

The 26-year-old local fighter did exactly as he promised when he demolished the German-based Kazakhstani in four rounds in front of a big crowd in the Golden Gloves event dubbed ’No Mercy’ that had seven international card.

Lerena produced arguably the best performance of his career on Saturday after training for the fight as if his life depended on the belt he was defending.

But he looked to have lost the first round after approaching it too cautiously‚ seemingly to avoid rushing out and getting caught cold.

He came out with guns blazing in the second round and dropped Mann with an uppercut. Mann looked like he was ready to give up but somehow got to his feet.

Sensing injury Lerena rained in a flurry of punches and again Mann hit the canvas. Only pride saw him get up again.

The writing was on the wall from that point and the Mann staggered against the ropes.

Referee Jean Robert Laine from Monaco intervened in the fourth round in two minutes and 37 seconds and it was all over.

Lerena's stoppage win over previously undefeated Mann was the local boxer's 10th in 22 wins against a loss.

The South African had been inactive for nine months due to a shoulder injury but rust was not evident on Saturday and it is testament to the amount of work he put into the fight.

Vastly experienced referee Jean Robert Laine from Monaco has been appointed to officiate the eagerly anticipated return to the ring of reigning IBO ...
Sport
3 years ago

Lerena has no amateur background but his trainers in his early years made up for his shortcoming.

Credit should go to trainers Nick Durandt‚ Colin Nathan and Sean Smith who were the first to work with him before Lerena joined Peter Smit.

Smith has done wonders with Lerane and guided him to the SA‚ WBF Africa‚ WBA Pan African and the IBO belts.

Today Lerena is rated highly by the both the WBA and IBF (in 11th place) while Mann occupies the 10th spot in the IBF rankings. The WBO rates Mann at fourth spot.