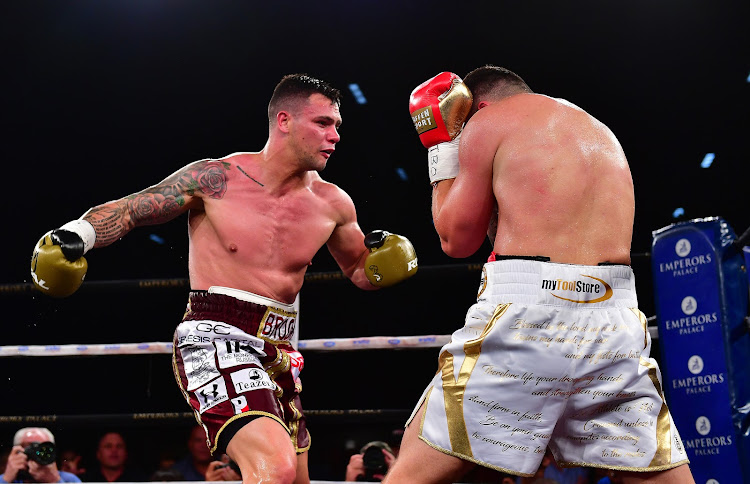 IBO cruiserweight champion Kevin Lerena and Czech challenger Vasil Ducar will surely get a lot nastier when they square up at Emperors Palace on Saturday‚ compared to their polite demeanours on Tuesday.

Promoter Rodney Berman described them as the best-looking cruiserweights on the planet as they went eyeball-to-eyeball for the first time at the prefight medical‚ where they both displayed impeccable manners.

“We don’t underestimate Vasil‚” Peter Smith‚ trainer of Lerena‚ with 22 wins and one loss‚ told the opponent‚ far less experienced with seven victories and a draw.

“We do respect you.”

Ducar was modest about his goal for the fight.

“So anything can happen‚” he said referring to the weekend’s upset victory by Andy Ruiz over world heavyweight champion Anthony Joshua.

Lerena said he wasn’t looking past Ducar‚ but added he would become the unified champion of the world.

He’s looking at fighting Noel Gevor in his next fight‚ and he’d like to take on Mairis Briedis too.

“I believe I’ll beat him every day of the week.”

Michael Mokoena‚ who takes on unbeaten prospect Jabulani Makhense in the highly anticipated main undercard bout‚ was substantially more definitive in his prediction.

“When I step into any fight I’m coming for the win … I’ve got a family to support. I do not see Makhense going through 12 rounds with me.”

Makhense‚ with seven wins‚ had earlier just said he intended on getting the W [the win]‚ although declining to say if he planned to get it inside the distance or on points.

“He is not going to get the W‚” said Mokoena.

Junior-middleweight prospect Roarke Knapp's biggest battle on Tuesday seemed to be with the buffet table‚ chomping on a handful of nuts while eyeing the dessert spread.

But he pointed out this was a battle he would win.

The tournament kicks off at 6pm on Saturday.