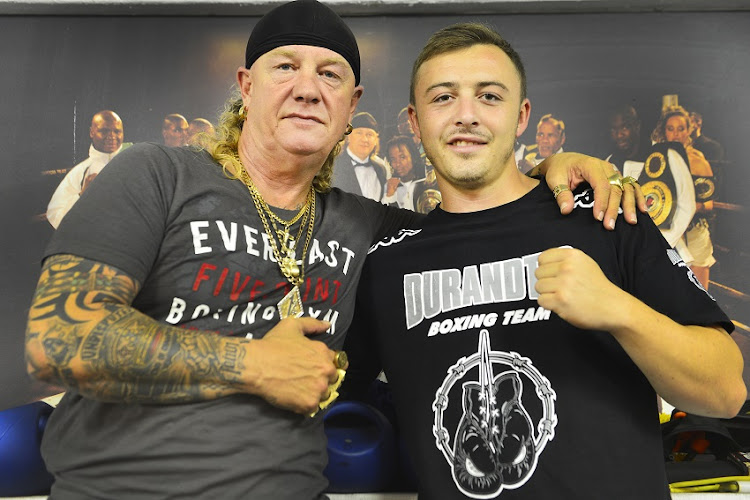 Young boxing trainer Damien Durandt has kept his vow to honour his famous father's memory and is on the verge of producing the first WBC champion from Congo.

Damien's father, the larger than life Nick, died after colliding with a vehicle while riding his motorbike in rural Free State on April 21, 2017.

The flamboyant 53-year-old had  produced 38 world champions, 27 international titlists and 95 South African title-holders at the time of his death.

The younger Durandt started working with his father from the age of 14 and has vowed to   continue the family business.

The 26-year-old trainer recently guided Congolese Ilunga "Junior" Makabu to victory against Russian Dmitry "Russian Hammer" Kudryashov in a fight for the WBC Silver cruiserweight belt that has now put his boxer within touching distance of the vacant title.

"We are extremely happy with the victory (against Kudryashov)," Durandt said.

"Junior showed guts, heart and willpower to stand and trade with one of the most dangerous punchers in the division.

Kudryashov went into the fight with a fearsome reputation and had 23 knockouts in 23 wins against three losses.

But an unperturbed Makabu put him down in round two and finished off the job with a three-punch combinations that violently jolted the Russian's head in round five.

The  fight was stopped by Panama referee Hector Afu.

"We look forward to now fighting for the WBC world title," said Durandt.

He is currently rated No 4,  a spot below Yuniel Dorticos.

Dorticos is the American who won the IBF belt last week after plastering Andrew Tabiti to the canvas in round 10 in what was the semi-final of the cruiserweight World Boxing Super Series.

Tabiti - who is trained by Floyd Mayweather Senior - is rated No 2 by the WBC while Murat Garsiev is rated No 1 for the vacant title.