Fikile Mbalula: We will support Bafana. After all, we don't have a second country 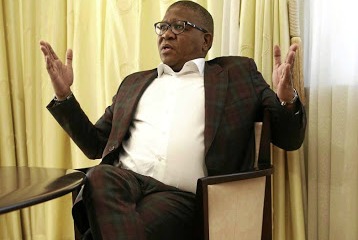 After calling Bafana Bafana a "bunch of losers" and claiming that SA would never roll out the red carpet for mediocrity, transport minister Fikile Mbalula has encouraged SA to get behind our national football team.

Mbalula has never hidden his frustration, and sometimes disgust, when Bafana have crashed out of international tournaments, famously declaring that our national team were a "bunch of losers" following their poor performance in the 2014 African Nations Championship.

He declared in 2013 that "we don't roll out the red carpet for mediocrity, but we roll it for the champions".

After Bafana's loss to Morocco this week meant Mali had to beat Angola for us to qualify as one of the best third-placed teams at the Africa Cup of Nations, Mbalula told a follower: "Angola will not lose. We are out, my man."

Before adding that there was "no inspiration" in the side.

He was left eating his words when Mali pulled off a win, meaning South Africa will play Egypt on Saturday in the last-16 round of the competition.

Responding to goalkeeper Itumeleng Khune's calls for the nation to believe in Bafana, Mbalula said we would be behind our boys.

"We will support the team. After all we don't have a second country ... "

We will support the team . After all we dont have a second country ...

Mbalula's comment sparked a flood of responses, with some pulling out the slips to say he never loved Bafana.

Others agreed that we have no choice but to sit and watch Mabena Mabena disappoint us again.

You don't have a 2nd country but have an ext 1 kkkk Zimbabwe South Africa Ext 1 . The 10th province

Once upon a time - we still feel the same way even today , it’s a bunch of pic.twitter.com/tRHkWMRyj5

We have Venda bro Fix pic.twitter.com/5c4adiTb67

Bafana still in Afcon and face hosts Egypt in last-16

Bafana Bafana are not just dramatically still at the 2019 Africa Cup of Nations, they now face hosts Egypt in Saturday's last-16 feature at the hosts ...
Sport
1 year ago

'It's like being woken up in the morgue to die again': Mzansi reacts to Bafana's Afcon 'resurrection'

Are they still Mabena Mabena?
Sport
1 year ago

We rate the Bafana players' performances in the Afcon group stages

Bafana Bafana’s pool matches at the Africa Cup of Nations have come to an end and now the side waits anxiously to see if they will reach the knockout ...
Sport
1 year ago
Next Article