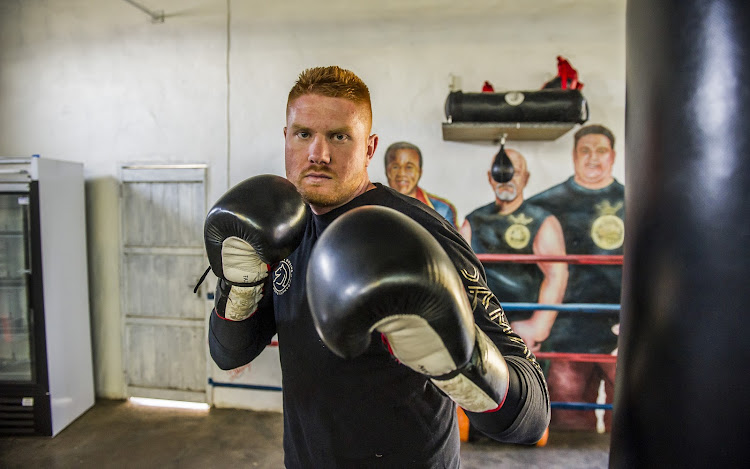 SA heavyweight boxing champion Ruann Visser is considering legal action after he was injured in a freak accident before a scheduled title defence in Cape Town on Monday.

When Visser leaned into the ropes in the moments before the fight — a common practice among boxers worldwide — the top strand snapped and the 2.09m-tall, 120kg fighter toppled backwards out of the ring.

He somehow managed to grab hold of the second rope with his gloved left hand, which helped to break his fall and turn his body so he didn’t land on his head, neck or back.

“He’s full of bruises,” said Nefdt Visser, his father and manager, adding the boxer would undergo x-rays on his left elbow and left knee later on Tuesday.

“His left arm is really stiff and sore.”

Visser senior said his son wanted to carry on with the fight against challenger Tian Fick, but the ringside doctor advised against it. He and trainer Steve Kalakoda over-ruled the boxer and called it off.

Visser said he had been contacted straight after the accident by Boxing SA (BSA) CEO Tsholofelo Lejaka who promised to investigate.

Lejaka confirmed that BSA was looking into the matter.

“We need to understand what went wrong. Was it human error or structural deficiency?” he said.

“A boxer needs to know when he get into a ring that he’s safe.”

This morning in Cape Town, South Africa, heavyweight Ruann Visser (18-2, 17 KO’s) was set to face Tian Fick (8-0, 5 KO’s) for the SA heavyweight title. Visser was injured when the ropes gave way and he fell out of the ring - canceling the bout. Thanks to @thomask892 pic.twitter.com/IGEfCObvFX

Visser said his son had been forced to take the fight to keep the belt after being given a December 24 deadline to make a defence or be stripped.

Footage of the bizarre mishap has gone around the world. Visser said he had been phoned by promoters from abroad and added that Cape Town-based German promoter, Wilfred Sauerland, had been ringside at the Camps Bay High School venue.