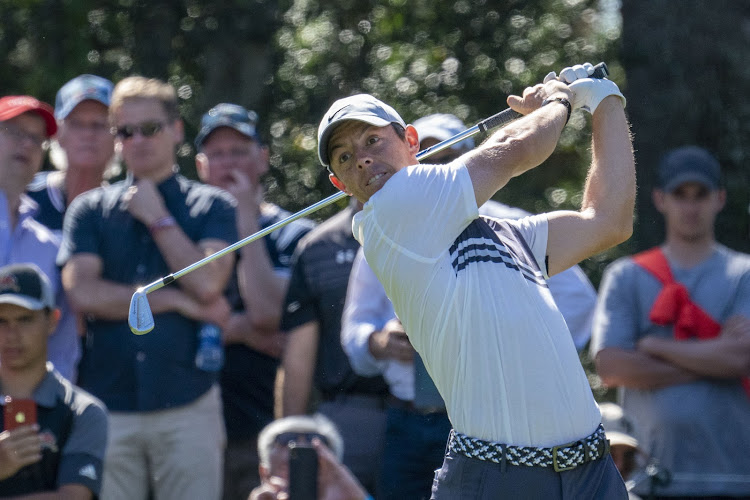 Rory McIlroy hits his tee shot on the eighth hole during the first round of The Players Championship golf tournament at TPC Sawgrass at Stadium Course in Florida on March 12, 2020.
Image: Kyle Terada-USA TODAY Sports

The North of Ireland Amateur Open in 2005 was not an event expected to produce much glamour, but a 16-year-old Rory McIlroy was dressed to impress.

His snow-white turtleneck and pants were underlined by a pink belt as well as a pink stripe running across his back.

His hat, also a lighter shade of pink, covered his blonde curls as he embarked on his first headline-grabbing assault on par – a record-breaking round of 11-under 61 at the iconic Royal Portrush.

"The confidence I had, and the cockiness I had at 16, sometimes I think I have to rediscover that a little bit," McIlroy told TheOpen.com last year.

The Northern Irishman concedes he cannot recollect many shot-by-shot accounts of his rounds, but he certainly can for that particular one.

"Once I got to nine-under through 16, I thought if I could par the remaining two and set the new record that would be pretty special," he said.

In fact, he came home with five straight birdies to sign for a round, which no one will be able to match or surpass due to the recent redesign of the course.

McIlroy has since collected 18 titles on the US PGA Tour, including four majors, and is a shoo-in for a spot in the Hall of Fame.

Despite his failure at claiming a Green Jacket at the Masters at Augusta National and inability to triumph at any of the majors since 2014, his relentless consistency in recent months proves his best days on the golf course are far from over.

Having missed the British Open cut at Royal Portrush last July, McIlroy has responded with victories at the Tour Championship and the WGC-HSBC Champions event in Shanghai.

A string of top-five finishes ensured he returned to the top of the world rankings in February for the first time in five years, before the golf calendar was ravaged by the Covid-19 pandemic.

"I thought I'd just like to wrap him in cotton wool for about six months and have him ready for Ryder Cup. But I'm sorry I didn't mean it!"

McIlroy has been ever-present in European colours since his Ryder Cup debut in 2010, becoming the first player to win the tournament four times before reaching 30 years of age.

Harrington believes McIlroy has a pivotal role to play – on and off the course – if they are to retain their title against the United States at Whistling Straits, Wisconsin in September.

"He is now becoming more comfortable being a leader," Harrington added.

"There are actually a few players who can do that job but Rory has the quality of his golf to back up his leadership credentials."

Tiger Woods and caddie sued by spectator over alleged 2018 incident

A Florida man has filed a lawsuit against Tiger Woods and his caddie Joe LaCava alleging he sustained injuries after LaCava shoved him when he tried ...
Sport
2 years ago

Tommy Fleetwood's caddy Ian Finnis has raised 10,000 pounds ($12,306) to help his fellow European Tour bagmen whose earnings have taken a hit due to ...
Sport
2 years ago