Olympic champion brothers back on the water as Croatia eases lockdown 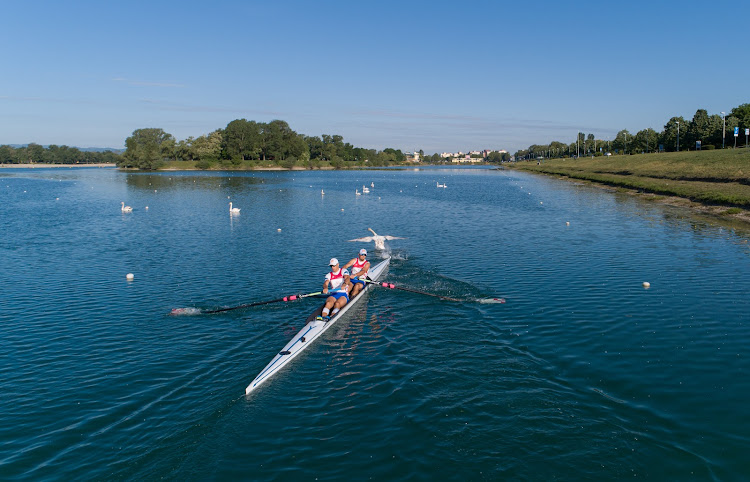 Brothers Valent and Martin Sinkovic are seen rowing during the training after the relaxation of the coronavirus disease (COVID-19) restrictions, in Zagreb's lake Jarun, Croatia, May 4, 2020. Picture taken May 4, 2020.
Image: REUTERS/Antonio Bronic

Olympic sculls champions Valent and Martin Sinkovic have returned to outdoor training after lockdown restrictions in Croatia were relaxed.

Croatia entered lockdown in March to limit the spread of the novel coronavirus, but with cases declining the government has eased the curbs on movement.

The Sinkovic brothers, who won the men's double sculls event at the Rio Olympic Games in 2016, have spent the lockdown training at home, but carried their boat out to Lake Jarun in Zagreb for a light session on Monday.

"We trained all the time at home, we had ergometers and a room bike, so we were in shape, we just have to get back into rowing shape, rowing technique," elder brother Valent told Reuters.

"That will take more than a week, probably a couple of weeks."

The 2020 Tokyo Olympic Games, originally scheduled to start in July, have been postponed to July 23 to August 8, 2021, due to the outbreak, but younger brother Martin said the change in dates had not affected him.

"I honestly don't think about it too much. I prepare as if it was going to be the Olympics," he said. "I had that attitude before they postponed it this year.

"Hopefully everything will be fine. I don't want it to be delayed again, but it is how it is and we'll adjust to the new situation."

The European Championships this year have also been pushed back to October but Valent said the brothers kept each other motivated.

"We motivate ourselves day after day, we try to be better, we try a better technique," he added.

"Now our focus is more on ourselves than on competition."

The North of Ireland Amateur Open in 2005 was not an event expected to produce much glamour, but a 16-year-old Rory McIlroy was dressed to impress.
Sport
1 year ago