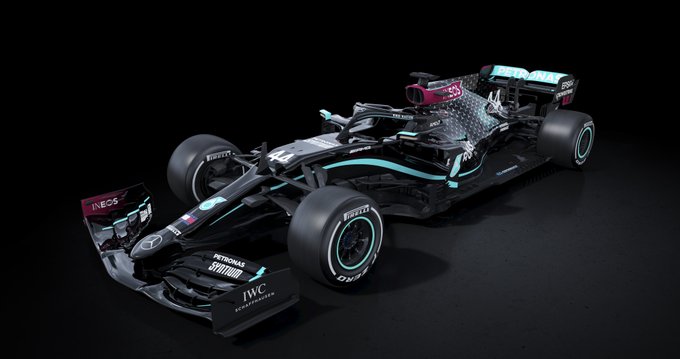 Mercedes introducing their new 2020 livery Black heart as a pledge to improve the diversity of their team.
Image: @MercedesAMGF1/Twitter

Formula One champions Mercedes unveiled black-liveried cars for the 2020 season on Monday as part of a public pledge to further improve diversity within the team and the world of motorsport.

Mercedes have traditionally raced in silver throughout their time in Formula One but will switch to black and have 'End Racism' emblazoned on the halo of both cars.

The team said the Black Lives Matter movement has "shone a searching light on how much we need new measures and actions in the fight against racism and all forms of discrimination".

"Racism and discrimination have no place in our society, our sport or our team: this is a core belief at Mercedes," Mercedes team principal Toto Wolff said in a statement.

"But having the right beliefs and the right mindset isn’t enough if we remain silent.

Formula One champion Lewis Hamilton condemned Bernie Ecclestone for "ignorant" comments about racism after the sport had distanced itself from the ...
Sport
11 months ago

"We wish to use our voice and our global platform to speak up for respect and equality, and the Silver Arrow will race in black for the entire 2020 season to show our commitment to greater diversity within our team and our sport."

Mercedes said only 3% of their workforce identified as belonging to minority ethnic groups, while just 12% are women.

The team plans to launch a diversity and inclusion programme before the end of the season as they look to improve those numbers and encourage more people from under-represented backgrounds into Formula One.

Six-times Formula One champion Hamilton said: "It's so important that we seize this moment and use it to educate ourselves whether you are an individual, brand or company to make real meaningful changes when it comes to ensuring equality and inclusivity."

Sebastian Vettel believes the back-to-back races in Austria at the start of the Formula One season will be decided on slim margins and his Ferrari ...
Motoring
11 months ago

Formula One champion Lewis Hamilton condemned Bernie Ecclestone for "ignorant" comments about racism after the sport had distanced itself from the ...
Sport
11 months ago