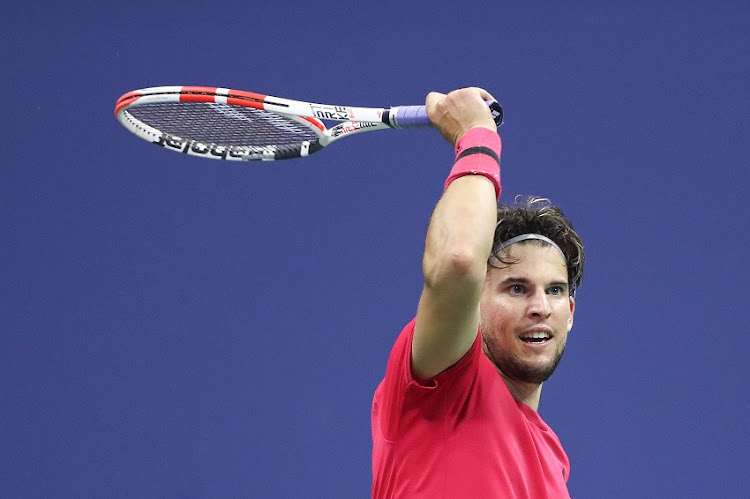 Dominic Thiem of Austria returns the ball in the third set during his Men's Singles semifinal match against Daniil Medvedev of Russia on Day Twelve of the 2020 US Open at the USTA Billie Jean King National Tennis Center on September 11, 2020 in the Queens borough of New York City.
Image: Matthew Stockman/Getty Images

Third seed Dominic Thiem was not at his best but still had enough firepower to see off Norway's Casper Ruud with a 6-4 6-3 6-1 win and march into the French Open fourth round on Friday.

U.S. Open champion Thiem, who has lost the last two finals at Roland Garros to Rafa Nadal, struggled with his serve in the opening set, facing six break points, but improved as the match progressed under the closed roof of Court Philippe Chatrier.

The 21-year-old Ruud arrived in Paris having reached the semi-finals in Rome and Hamburg in the lead-up to the Grand Slam and came into the third-round clash having won more tour level claycourt matches than anyone else in 2020.

Bidding to become just the second Norwegian player to reach the fourth round at a Grand Slam - his father Christian reached the last 16 at the 1997 Australian Open - Ruud gave a good account of himself but it was not enough.

His highlight was a brilliant 'tweener' lob, hit between his legs, during the second set which landed on the baseline with Thiem scampering back from the net but unable to return.

"I'm very happy. It was a great match, I didn't make any mistakes," Thiem said in a courtside interview. "Casper is a really great player, very attractive to play. I think there were many good rallies. It was a good match from both of us.

"The conditions are very nice to play under the roof, no wind, so the court is perfect and everything is prepared for great matches like that."

Facing Ruud for the first time, the Austrian broke the 28th seed's serve six times and hit 32 winners and sealed the match with a fifth ace on his second match point.

Ruud argued with the umpire on a couple of occasions during the contest after some close line calls went against him.

"Maybe the first four games were not as good as the rest of the match by me but he's a really good player, especially on clay, probably one of the best of the season. I guess if we give him one more year, then he's going to be super dangerous.

"Here in Roland Garros the wet, slow conditions suited me a little bit more than him. But in general I was super happy with my performance. I think it was one of the best ones this year."