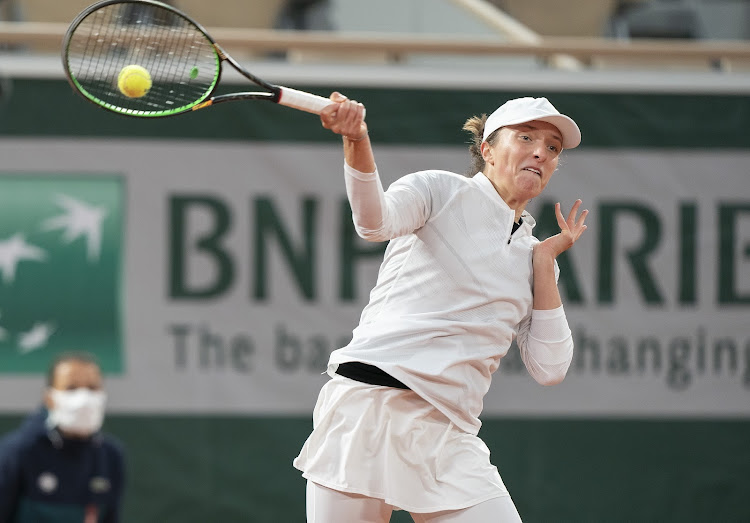 Top seed Simona Halep made no excuses after going down tamely to Polish teenager Iga Swiatek in the fourth round of the French Open on Sunday, instead crediting her opponent's level of play in the 6-1 6-2 thrashing.

At the same stage at Roland Garros last year, Halep defeated Swiatek 6-1 6-0 in 45 minutes, but the 19-year-old turned the tables spectacularly on Sunday to end the Romanian's 17-match winning streak.

"All the credit to her, she played unbelievable today and she was everywhere and she hit all the balls in very strong, very powerful," world number two Halep, who won the French Open in 2018, told reporters.

"It was a little bit cold and I couldn't be at my best, but she played really well and her match was like, no, it was her match today."

Halep was a strong favourite to win a third Grand Slam in Paris but Swiatek gave her no chance to stage a comeback during the 68-minute mauling.

The Romanian, 29, did not manage a single breakpoint on the serve of Swiatek, who peppered the Court Philippe Chatrier with 30 winners.

Halep said she was not surprised, however.

"Because everyone at this level is playing really well and in the fourth round of a Grand Slam it's not a surprise any more, because if you are there it means that you have a great game," she said.

"For sure I could have done something different, like playing more balls in and trying to push her back, but it's all I had today and I couldn't make something better," Halep said.

"She really dominated the match and was really aggressive. Maybe the third match will be better, but it's OK, I'll take it."

Halep won the last three tournaments she played and said she was happy to have been able to play the French Open amid the Covid-19 pandemic.

"I realise that it was a fantastic year with all the tough moments that we all had, so I'm not going to ruin the whole year just for a match," said Halep, who skipped the US Open Grand Slam in New York due to the pandemic.

"Of course it's not easy to take it, but I'm used to some tough moments in this career. So I will have a chocolate and I will be better tomorrow."

Polish teenager Iga Swiatek booted top seed Simona Halep out of the French Open on Sunday with a crushing 6-1 6-2 victory to make her maiden Grand ...
Sport
1 year ago

Roger Federer and Serena Williams have confirmed they will take part in the 2021 Australian Open, with the year's first Grand Slam in Melbourne ...
Sport
1 year ago

Top seed Simona Halep extracted brutal revenge on American teenager Amanda Anisimova with a 6-0 6-1 victory to move ominously into the fourth round ...
Sport
1 year ago

Third seed Dominic Thiem was not at his best but still had enough firepower to see off Norway's Casper Ruud with a 6-4 6-3 6-1 win and march into the ...
Sport
1 year ago