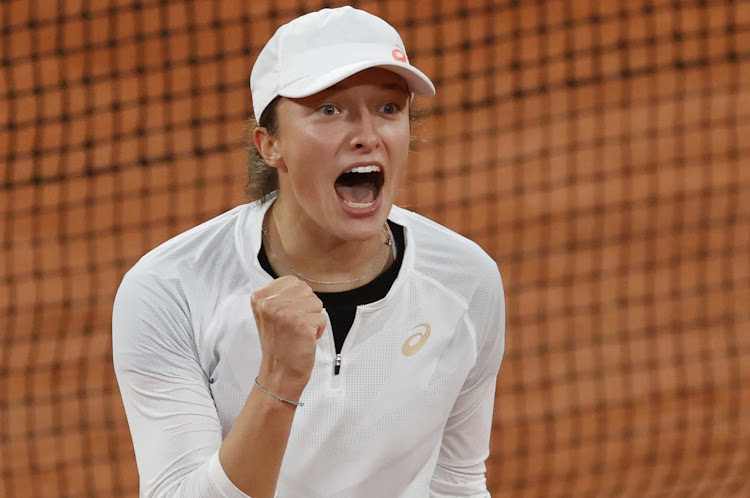 Halep came into the fourth round clash on a 17-match unbeaten streak having defeated the 19-year-old Swiatek, ranked 54th in the world, 6-1 6-0 in 45 minutes at the same stage last year in the claycourt Grand Slam at Roland Garros.

"I wasn't experienced at all then. That was my first match in a big stadium," Swiatek said in her on-court interview, after wiping away tears. "I was pretty stressed.

"Since then I have made huge progress and I have played few big matches ... it helped me a lot. And right now I think I can handle the pressure."

Swiatek avenged that morale-sapping defeat and her victory under the closed roof of Court Philippe Chatrier in 68 minutes was no less impressive against the 2018 French Open champion, ranked number two in the world.

Halep arrived in Paris having won claycourt tournaments in Prague and Rome and with the Australian world number one deciding against defending her French Open title, the 29-year-old was the overwhelming favourite to add a third Grand Slam trophy to her cabinet.

But she watched in disbelief as Swiatek started with aggression and painted the red clay with winners, often leaving Halep rooted to the spot on the court.

Swiatek hit 30 winners as opposed to the 12 managed by Halep, while the Polish player did not face a single breakpoint on her service games.

"I don't know what happened actually, I felt like I was playing perfectly. I was so focused the whole match, even I am surprised that I can do that," Swiatek said.

The main talking point of the French Open thus far is defending champion Rafa Nadal's ominous warning to his rivals after a ruthless win over Italy's ...
Sport
1 year ago

Top seed Simona Halep extracted brutal revenge on American teenager Amanda Anisimova with a 6-0 6-1 victory to move ominously into the fourth round ...
Sport
1 year ago

Third seed Dominic Thiem was not at his best but still had enough firepower to see off Norway's Casper Ruud with a 6-4 6-3 6-1 win and march into the ...
Sport
1 year ago

Former champion Jelena Ostapenko ousted second seed Karolina Pliskova from the French Open with a 6-4 6-2 win in the second round on Thursday after ...
Sport
1 year ago