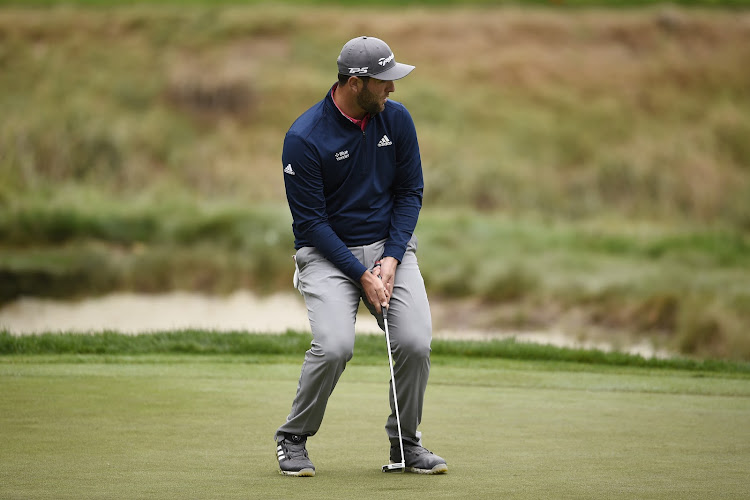 Jon Rahm achieved the feat twice, on his birthday, but his first hole-in-one was unfortunately not captured on camera.
Image: Kelvin Kuo-USA TODAY Sports

Jon Rahm had a hole-in-one at Augusta National for the second day in a row, and this time there was a camera to record the feat for posterity even if there were no fans to celebrate the feat.

There is no record of Rahm's Monday ace at the 225-yard fourth hole, except for a short grainy video of him extracting the ball from the cup.

But the TV cameras were running on Tuesday when the Spaniard stepped up to the tee box at the par-three 16th on his 26th birthday, and attempted a trick shot that is part of the Masters practice round tradition.

Eschewing a tee, he hit his ball off the turf and skipped it across the pond, his ball skimming the water three times before bouncing up onto the putting surface.

From there it rolled and rolled, taking the contour of the green perfectly and curling up and around to the left and then down into the cup, which was cut in the back left corner of the green.

His ball was on the move for 20 seconds, the excitement only building as it got closer and closer to the hole.

His second in two days, Jon Rahm skips his way to a hole-in-one at No. 16 - on his birthday, no less. #themasters pic.twitter.com/rtefAN5XtH

In normal times there would have been thousands of spectators milling about the hole but in the absence of fans, banned this year due to novel coronavirus concerns, only a handful of people witnessed the feat and screamed in delight.

Rahm could barely contain his joy, while practice round partner Rickie Fowler almost keeled over in laughter at the improbability of it all.

The episode offered a timely reminder of how this year's Masters will be so very different.

Though players have quickly adjusted to playing without fans since returning to competition after a three-month professional golf shutdown, the Masters and its "patrons" as they are known are inextricably linked.

"Just imagine the roars that would have created in a normal year," said Rory McIlroy, speaking at a news conference shortly after learning of Rahm's ace.

Imagine also if there had been nobody there when Tiger Woods chipped in famously at the same 16th hole and celebrated with a primal scream in the final round en route to victory in 2005.

Or if all had been quiet when Jack Nicklaus almost aced the hole as he charged to victory in 1986.

This year some players are not even bothering with the trick shot practice round routine.

"It's definitely for the fans," said Justin Thomas.

"Sunday we were going to skip (our balls) and we had a group of members behind us, and they were on the 15th green, so we didn't feel the need to hold them up.

"And then yesterday Tiger and Freddy didn't really want to and I kind of do whatever they say around this place, so I'm 0-for-2."

Former winner Garcia out of Masters after positive Covid-19 test

Former champion Sergio Garcia pulled out of this week’s Masters tournament on Monday after testing positive for COVID-19.
Sport
7 months ago

Im Sung-jae may be a long shot to win the Masters on his first trip to Augusta this week but the talented South Korean has already decided what will ...
Sport
7 months ago

Elder another sign Augusta National reckoning with past while looking ahead

Founded by Bobby Jones and Clifford Roberts and opened for play in 1933, Augusta National existed as a sanctuary for some of the world’s most ...
Sport
7 months ago