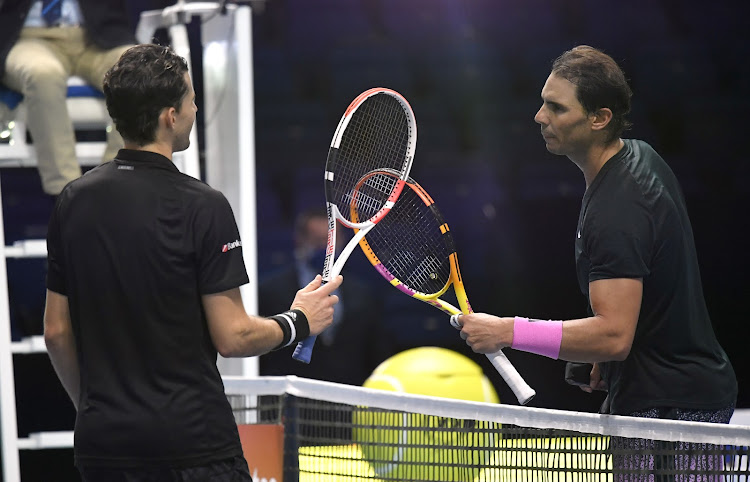 Spain's Rafael Nadal and Austria's Dominic Thiem after their group stage match at the ATP Finals in London on November 17 2020.
Image: REUTERS/Toby Melville

Australia's Victoria state government is confident the Australian Open will go ahead but offered no assurances on Wednesday that players would be allowed to arrive in time for the season-opening ATP Cup and other events in January.

The men's ATP Tour told players on Tuesday that the start of the 2021 season remained up in the air due to "challenges" in Australia, which is effectively closed to international arrivals due to Covid-19 protocols.

Tennis Australia (TA) planned for players and their entourages to arrive in Victoria in mid-December to have time to undertake a mandatory two-week quarantine period before competing in January.

But Victoria premier Daniel Andrews questioned whether players needed to arrive so early and said the government was still working with Tennis Australia on quarantine arrangements.

"(Tennis Australia) are working (with) all of their partners and we're confident that we'll finish up with an Australian Open," Andrews told reporters.

"Whether (players) need to be here in December is the other issue.

"I don't know if that necessarily means there isn’t an Australian Open."

The Australian Open is scheduled to start on January 18 at Melbourne Park but dates for the team-based ATP Cup and other events that lead into the year's first Grand Slam have yet to be fixed.

If players are unable to enter Australia until January, they would not be able to play the warmup events unless allowed to while in quarantine, a concession that has not been available to other sports in the country.

The ATP said it was working "as hard as possible" to deliver the calendar of events.

"In discussions with Tennis Australia over the past 24 hours, we have been informed there are some new challenges around the previously planned arrival dates for players and team members," the ATP said in a note to players.

TA boss Craig Tiley told local media this week that the governing body had decided to shift the ATP Cup and all other domestic tournaments to Victoria in January to mitigate the risk of logistical problems arising from Covid-19 protocols.

But Tiley's plans were given short shrift by Andrews, who said his government had not even signed off on the Grand Slam.

But the nation is on high alert after a fresh outbreak in South Australia state in recent days, which prompted authorities to order a six-day lockdown.

World number two Rafa Nadal said arriving later in Australia would not be a "big difference" as long as players could train while in quarantine.

"The only negative thing is we have to be there like 16 days in advance (of competing)," he told reporters at the ATP Finals in London on Tuesday.

World number one Novak Djokovic said on Monday he was still in the dark as to whether he would be able to lead Serbia's title defence at the ATP Cup.

Daniil Medvedev's ATP Finals debut last year proved to be a chastening experience as he suffered three defeats but on Monday the Russian made his ...
Sport
1 year ago

Novak Djokovic has said he had mixed feelings about ending a "strange year" as the world number one for a sixth time after the season was hit hard by ...
Sport
1 year ago

Shorn of fans and prize money, the event should nevertheless cap a tough year with a smashing display by the world's top eight
Sport
1 year ago

Rafael Nadal says the Paris Masters has been a "positive tournament" for him despite Saturday's semi-final defeat to Alexander Zverev, and hopes it ...
Sport
1 year ago

The ATP Finals, the flagship event on the men's tennis Tour, will continue preparations to be held without spectators in London this month, ...
Sport
1 year ago