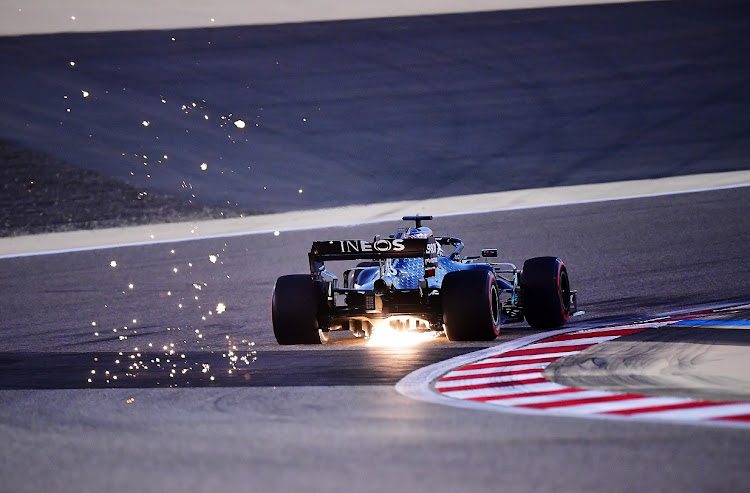 George Russell of Great Britain driving for Mercedes during practice ahead of the F1 Grand Prix of Sakhir at Bahrain International Circuit on December 4 2020.
Image: Giuseppe Cacace - Pool/Getty Images

Formula One champion Lewis Hamilton’s late stand-in George Russell ended his first day atop the time sheets with the fastest time for Mercedes in Friday practice for the Sakhir Grand Prix.

The 22-year-old, put into Hamilton’s seat after his fellow Briton tested positive for Covid-19, could not have asked for a better start to his debut with the world champions after lapping fastest in both of the day’s two sessions.

Russell headed Red Bull’s Max Verstappen in both. He also finished ahead of team mate Valtteri Bottas, who was nursing damage to his Mercedes in the opening 90 minutes and had a lap time, which would have been faster than Russell’s best, deleted for exceeding track limits in the second session.

The Finn ended the two sessions fourth and 11th, respectively.

“I’ve found it good,” Russell, whose 54.546 seconds benchmark from the opening session stood as the fastest time of the day, told Formula One TV.

“I’m working with the best in the business and I’m learning so much every single lap I’m in the car.

“I do think the lap times are a little bit deceiving at the moment and aren’t a true representation of the pace,” he said, adding he would have been a tenth-and-a-half slower than Bottas had the Finn’s lap time not been deleted.

This weekend is being seen as something of a shoot-out between Russell and Bottas for a 2022 seat at Mercedes. The world champions have denied that is the case.

But Russell, who is a Mercedes-backed driver and has been placed at engine customer Williams to learn the ropes, has done his chances of one day driving for the German marque’s works team no harm with his performance so far.

Verstappen’s team mate Alexander Albon set the third-fastest time of the day, which again came in the opening 90 minutes.

But the British-born Thai driver, who is driving for his seat, slipped to fifth in the second session.

Sergio Perez in the Racing Point ended the day third instead, ahead of Renault’s Esteban Ocon and Albon.

Daniil Kvyat was sixth for AlphaTauri with Lance Stroll in the other Racing Point seventh. Daniel Ricciardo was eighth for Renault.

AlphaTauri’s Pierre Gasly and Carlos Sainz, who reported a problem changing gears in his McLaren, rounded out the top 10.

Formula One this weekend is racing around the shorter outer layout of the Bahrain International Circuit that hosted last Sunday’s race.

Pietro Fittipaldi is standing in for the injured Romain Grosjean at Haas while Formula Two racer Jack Aitken is replacing Russell at Williams.

They finished at the bottom of the time sheets, with only Charles Leclerc, who suffered a driveshaft failure on his Ferrari and did not set a time, behind them in the second session.

No Lewis Hamilton as F1 faces new challenge in Bahrain

Lewis Hamilton's unexpected absence will add extra spice to a Sakhir Grand Prix that represents a new challenge for the seven-time world champion's ...
Motoring
1 year ago