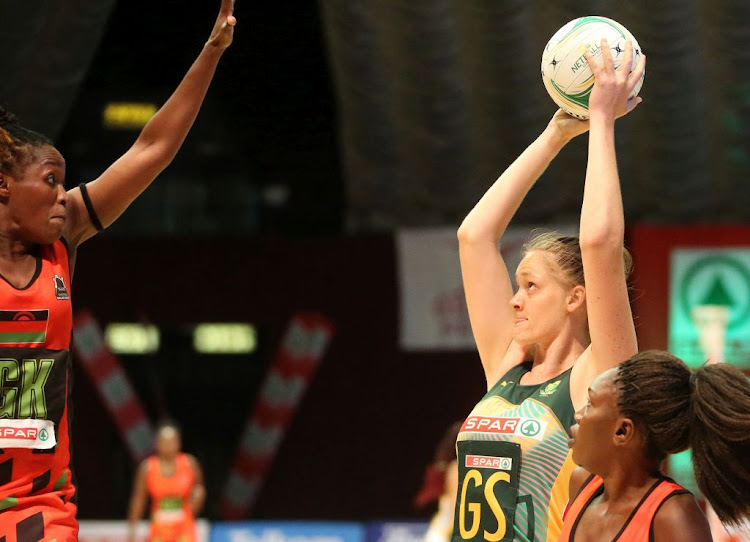 Ine-Mari Venter of South Africa in action against Malawi during the Spar Netball Challenge 1st test match between South Africa and Malawi at the Superbowl on November 26 2020 in Sun City, South Africa.
Image: Reg Caldecott/Gallo Images

Tshwane coach Jenny van Dyk is sweating on the fitness of key Proteas goal-shooter Ine-Mari Venter for the semifinal stage of the Spar National Netball Championships under way in Bela-Bela.

Tshwane and Dr Kenneth Kaunda are favourites to qualify for the semifinals after a good run in the group stages but Van Dyk is hoping that Venter responds to her ankle treatment.

“She landed on her ankle last night‚” Van Dyk said after Tshwane were stunned 34-38 by Dr Kenneth Kaunda in their group match on Wednesday.

“She is an international player who is going to play internationally next year‚ so we want to clear her before we put her back on court. Today (Wednesday) is not the final of the championship‚ so it’s important to look after our players in the process.”

Though she is hoping to have her back on court during the semifinal and hopefully in the final on Saturday‚ Van Dyk said it will not be a train smash if she doesn’t recover.

“There is definitely a possibility for her to be OK but I am confident that even without her we will be able to play and win the final on Saturday.

“In all respect‚ we have done very well without Ine-Mari for the past two years because she has been playing overseas. I expect us to perform even without Proteas in the team‚ there are a few boxes that we need to tick and definitely it is going to be a good semifinal and final.”

Dr Kenneth Kaunda coach Dr Elsje Jordaan was not fully satisfied with the win over Tshwane.

“It wasn’t a good game‚ I thought it was scrappy and loose. But at the same time‚ I have said it right from the start that with six U21 players‚ we will take any win against any team from a confidence perspective. Again, our attack was just not working‚ there was wrong decision making but the pleasing thing was that our fourth quarter was really strong and we managed to close down the game.

“During out team talk last night‚ we said if we can be in the game and get to the fourth quarter being two or more up‚ we might give ourselves a chance to win it. Against a champion team like Tshwane‚ you can never underestimate anything and I am very pleased that we managed to hang in there during the fourth quarter and that was pleasing.”