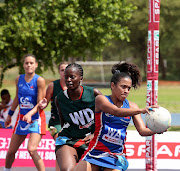 Defending champions Tshwane will take on highly improved Dr Kenneth Kaunda in the final match of the Spar National Netball Championships in Bela-Bela on Saturday morning.

In what has turned out to be a repeat of last season’s final in the seniors category of the competition‚ Dr Kenneth Kaunda will be hoping to cause an upset and get revenge for last year’s defeat. Tshwane booked a place in the final with a comprehensive 55-23 thrashing of Johannesburg while Dr Kenneth Kaunda easily overcame Cape Town 54-16 in the other semifinal.

Looking ahead of the final‚ Tshwane coach Jenny van Dyk said they can’t underestimate the youthful and hungry Dr Kenneth Kaunda who won all their five games in the lead-up to the final.

“We are looking forward to the game and we are definitely not going to underestimate them‚” she said adding that the team that is going to have a clear game plan and be clinical in execution will emerge victorious.

“They are very hungry but we are also hungry and we want to keep our title. To us it’s about who can be most clinical and who can setup a right game plan and take the big moments in the game.

“It is going to be a tough one but we are good with tough games. We like it when it’s tough because we grow when we are out of our comfort zone. And if you look at this Dr KK team‚ they only have a goalkeeper that did not play in the Telkom Netball League (TNL)‚ so this is basically a team with combinations and they know each very well except for the goalkeeper.”

Dr Kenneth Kaunda coach Dr Elsje Jordaan said they are underdogs and have nothing to lose even though they beat Tshwane during the early stages competition.

“We have absolutely nothing to lose but we have a gold medal to win and that’s how we going to approach it. Being positive and strong minded and at the end of the match what will be‚ will be‚ we cannot control the result but we will fight until the last second of the match.”

Dr Jordaan admitted that they will be disappointed if they lose to Tshwane for the second year in a row.

“It will be very disappointing‚ but having six U21 players in a squad of 10 is massive to reach the final for them. It is also a great opportunity for these youngsters to put up their hand and show that they can play at this level because they definitely can play the game. Once you step over that white line‚ its 14 bodies‚ one ball‚ the same posts‚ same height and that is how we see it.”