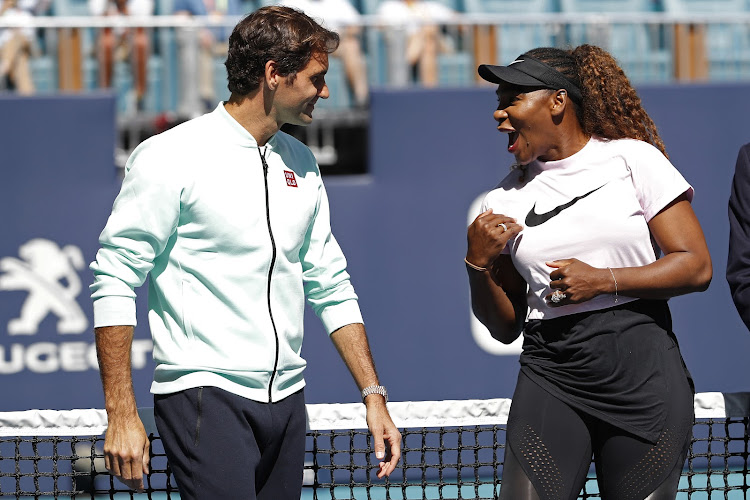 A file photo of Roger Federer and Serena Williams sharing a light moment in May 2019. Tennis Australia boss Craig Tiley said there had been some unusual requests from athletes in lockdown.
Image: Geoff Burke-USA TODAY Sports

The Australian Open quarantine facilities are still holding 15 people, including one player and two others who tested positive for Covid-19 earlier in their lockdown, Melbourne health authorities said on Sunday.

The vast majority of the more than 1,000 players and their entourages undergoing 14 days of isolation in Melbourne and Adelaide were released by midnight on Saturday and have started preparing for the Grand Slam.

Spain's Paula Badosa was the only player to have confirmed that she tested positive for Covid-19 in Melbourne, restarting the clock on her mandatory period of isolation.

Victoria state on Sunday reported no local transmission of the coronavirus for the 29th straight day and Australian Open tournament chief Craig Tiley said the priority for his organisation remained the health of the local community.

"No one is coming out of quarantine unless it is absolutely proved that they are not incubating the virus," he said on ABC TV on Sunday.

"They've had a test every day, there's no quarantine process in the world that has been as rigid as this one.

"The players are in the community, and they are like us, and we have to keep practising the health protocols to keep us safe."

French Open champion Iga Swiatek said the quarantine had been comfortable, although she counted herself lucky she had not been one of the 72 players who were not allowed out to practise because of Covid-19 cases on their flights to Australia.

"Obviously I sometimes needed to go out, to breathe some fresh air, but I couldn't do that (but) it's not a problem," the Pole told reporters at Melbourne Park.

"I'm really glad and I really appreciate that we have a chance to play and to do our job, to do what we love."

That attitude was reflected by most players who spoke to the media after quarantine, a far cry from the early days of isolation when complaints on social media were commonplace.

Tiley, who managed to defuse that criticism with long daily calls with the players, said there had been some unusual requests from athletes in lockdown.

"The most bizarre request was for a kitten but then we explained that there was a correlation between the coronavirus and kittens so that one went away," he laughed.

"There was someone asked if there was a chance of getting some animals indigenous to Australia (and) there were a few times I wouldn't have minded having a boxing kangaroo in there."

Rafa Nadal feels tennis players are privileged to be able to compete at the Australian Open during the Covid-19 pandemic and urged fellow ...
Sport
1 year ago

Djokovic is our LeBron but we have to call him out sometimes, says Kyrgios

Nick Kyrgios has likened Novak Djokovic to NBA player LeBron James in his influence both on and off the court but says he had a duty to call out the ...
Sport
1 year ago

While most of the world's top players quarantine in their hotel rooms ahead of the Australian Open, home hope Ash Barty is relishing the freedom of ...
Sport
1 year ago

Andy Murray tests positive and is out of Aussie Open

Former world No 1 Andy Murray said he was "gutted" after deciding to withdraw from next month's Australian Open tennis championships following a ...
Sport
1 year ago