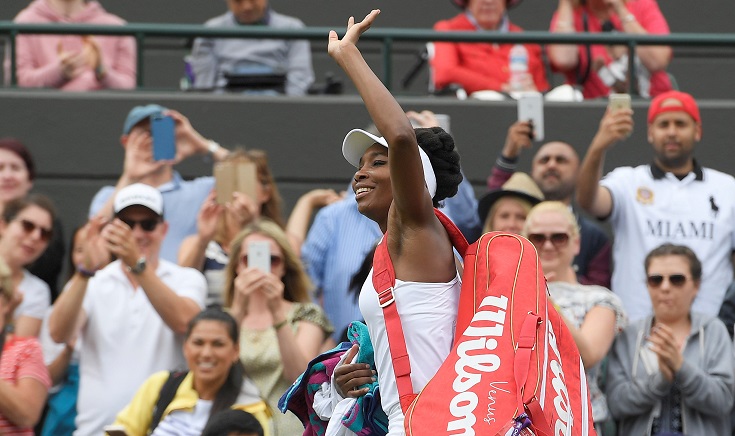 A file photo of Venus Williams celebrating afger winning the first round match of a Grand Slam.
Image: REUTERS/Toby Melville

American Venus Williams brushed off a question about her age after defeating Belgian Kirsten Flipkens at the Australian Open, but the 40-year-old's ongoing passion for her sport was hailed as an inspiration by several of her fellow professionals.

After failing to get past the first round at each of the three Grand Slams held last year, Venus turned back the clock on Monday by beating Flipkens 7-5 6-2 to ease into the second round in Melbourne.

"Would it be front of mind for you if you were playing a professional tennis match?" Williams said in reply to a question about her age during her post-match interview.

"There you go," she added, when the reporter replied, "Not necessarily."

Younger sister Serena Williams, who eased into round two with a 6-1 6-1 drubbing of Germany's Laura Siegemund, said Venus's optimism and work ethic were a daily source of personal inspiration.

"She never gets frustrated about her situation, health-wise," Serena said. "She's always looking on the bright side. Then she works so hard.

"It's also very inspiring because she still pushes me on a level that no one's able to push me."

The Williams sisters' contribution to tennis was also highlighted by Japan's Naomi Osaka, who reached the second round after demolishing Russia's Anastasia Pavlyuchenkova.

"I actually interact with Venus more. I feel like I do talk about Serena a lot, but Venus is sort of the reason why Serena is where she is," Osaka said.

Canadian Milos Raonic, who also won his first-round match, said Venus was an inspiration for a lot of people even though she had nothing left to prove.

"Just in general, you see Venus, she's out there on court training," he said.

"She takes it incredibly seriously. She... doesn't have to be out on tour other than her own desires and her own passion for the sport.

"She's here because she loves it. She'll take whatever opportunity and try to really make the most of it, give it her all."

World number one Novak Djokovic hit back at criticism from Nick Kyrgios on Sunday, saying he has little respect for the Australian firebrand off the ...
Sport
1 year ago

With history in sight, Nadal seeks to scratch 12-year itch in Melbourne

After drawing level with Roger Federer's record of 20 Grand Slams last year, Rafael Nadal could once again capitalise on the Swiss's absence from the ...
Sport
1 year ago