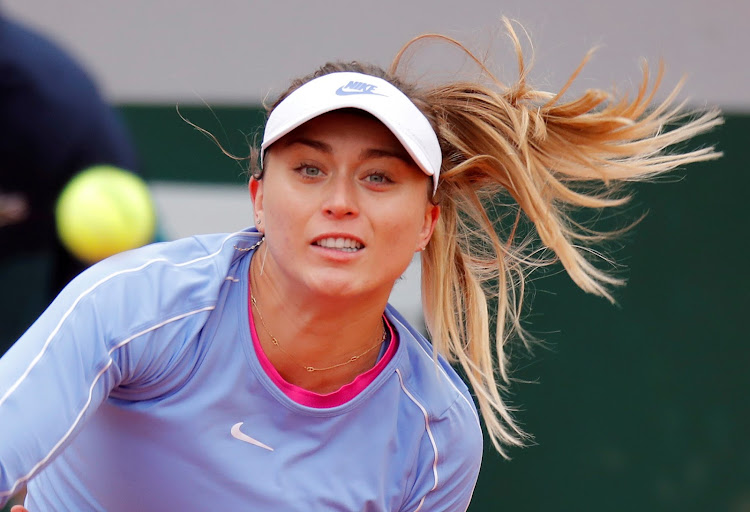 Spain's Paula Badosa was the only player at the Australian Open to test positive for Covid-19.
Image: REUTERS/Charles Platiau/File Photo

Paula Badosa, the only Australian Open player to test positive for Covid-19 in the leadup to the Grand Slam, bowed out "sad and disappointed" from the first round on Tuesday and blamed a tough three-week quarantine for ruining her preparations.

Badosa battled to a position where she served for the match at 5-4 in the deciding set but ended up double-faulting on break point and promptly crumbled to a 6-7(4) 7-6(4) 7-5 loss to Russian qualifier Liudmila Samsonova.

"After 21 days in quarantine and one month without playing, I fought until the last minute. But it wasn't enough. I think my level wasn't on my best," the Spanish world number 70 told reporters.

"I'm a little sad or disappointed on that, but I have to see the situation and it goes how it goes."

Badosa had a fraught buildup, testing positive to the novel coronavirus while in quarantine last month.

Her infection saw her transferred to a separate "health hotel" where Covid-19 cases are isolated, and the clock on her mandatory period of isolation was restarted.

Badosa complained bitterly about the experience, saying it was "far and away the worst" of her career.

Unable to compete in any of the leadup events, she was short of match fitness when confronting Samsonova on a warm afternoon and was dragged into a dogfight by the world number 130.

Fatigue appeared to take a toll as she served to stay in the match, and Samsonova took full advantage, running Badosa ragged until the Spaniard sprayed a shot wide on match point.

Samsonova advances to a second round match against last year's finalist Garbine Muguruza.

Badosa is unsure what she will do next.

"I don't even know because I can't move right now," she said.

Badosa's complaints about her strict quarantine were viewed dimly by many in Australia and particularly in Melbourne, which went through a near four-month hard lockdown to halt a second wave outbreak last year.

She said she had been misunderstood.

"Emotionally I have to be honest, it was tough reading all that kind of things," she said of the criticism.

"I know the rules are the rules. But the conditions, they weren't for a Grand Slam, for an athlete, you know?

"In Australia, they were being very tough on me."

Rafa Nadal back in form at Australian Open

Rafa Nadal defied his gloomy injury prognosis to crush Laslo Djere 6-3 6-4 6-1 and reach the second round of the Australian Open on Tuesday.
Sport
1 year ago

Victoria Azarenka said she did not get her post-quarantine preparations right for the Australian Open after the former champion was knocked out in ...
Sport
1 year ago

Dominic Thiem overcame an early wobble before overpowering Mikhail Kukushkin 7-6(2) 6-2 6-3 to reach the second round of the Australian Open on ...
Sport
1 year ago

Tears for fears: Emotional Sofia Kenin grinds into second round

An anxious Sofia Kenin was in tears before launching her title defence at the Australian Open on Tuesday and again after completing an unconvincing ...
Sport
1 year ago

American Venus Williams brushed off a question about her age after defeating Belgian Kirsten Flipkens at the Australian Open, but the 40-year-old's ...
Sport
1 year ago