Tears for fears: Emotional Sofia Kenin grinds into second round 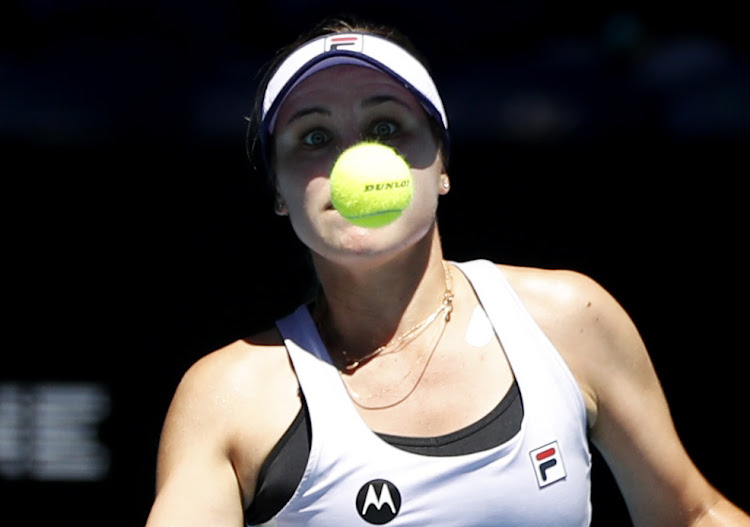 Sofia Kenin of the US in action during her first round match against Australia's Maddison Inglis.
Image: REUTERS/Asanka Brendon Ratnayake

An anxious Sofia Kenin was in tears before launching her title defence at the Australian Open on Tuesday and again after completing an unconvincing 7-5 6-4 win over local wildcard Maddison Inglis.

Fourth seed Kenin, who claimed her maiden Grand Slam at Melbourne Park last year in a major surprise, found the going tough against the world number 133 Australian on a glorious morning at Rod Laver Arena.

The Russia-born American was broken twice in the first set and slumped to an early 3-1 deficit before recovering. She later double-faulted on match-point before closing it out.

Kenin has always worn her heart on her sleeve and was candid about her emotions, saying she needed to get a grip of them if she hoped to go far in her title defence.

"Yeah, emotions, some tears and stuff. I felt a little bit (of) pressure," the 22-year-old said of her lead-in to the match.

Kenin said that while she gets nervous before all of her matches, the anxiety level was cranked up in Melbourne as she bids to defend her title.

"I have to try to put my emotions aside for a match," she added.

"I have to somehow get better at that if I want to do well here."

Even after thumping down a backhand drive-volley to seal the win on a third match point, Kenin said she had to stop herself from weeping on court.

"Eyes were a little bit wet during the match," she said.

"I try to cool off, put that aside ... As the match went, luckily it was fine. Towards the end, you could see I got a little bit emotional as well.

"Standing at the net, 'Okay, don't cry'. My eyes were wet, obviously."

She will next play Estonia's Kaia Kanepi, who beat her in three sets in Rome in 2018, their only career meeting.

Just seeing that Kanepi was winning her first round match against Anastasija Sevastova was enough to tug at Kenin's emotions again.

"After my match, I came off court, and I looked that she was winning," she said.

"Maybe (I) kind of broke down a little bit because obviously I remember I lost to her."

Dominic Thiem overcame an early wobble before overpowering Mikhail Kukushkin 7-6(2) 6-2 6-3 to reach the second round of the Australian Open on ...
Sport
1 year ago

Game, set and mask: fans trickle in on first day of Australian Open

Crowd capacity for this year’s event in Melbourne has been capped at 30,000 per day
Sport
1 year ago

American Venus Williams brushed off a question about her age after defeating Belgian Kirsten Flipkens at the Australian Open, but the 40-year-old's ...
Sport
1 year ago

World number one Novak Djokovic hit back at criticism from Nick Kyrgios on Sunday, saying he has little respect for the Australian firebrand off the ...
Sport
1 year ago